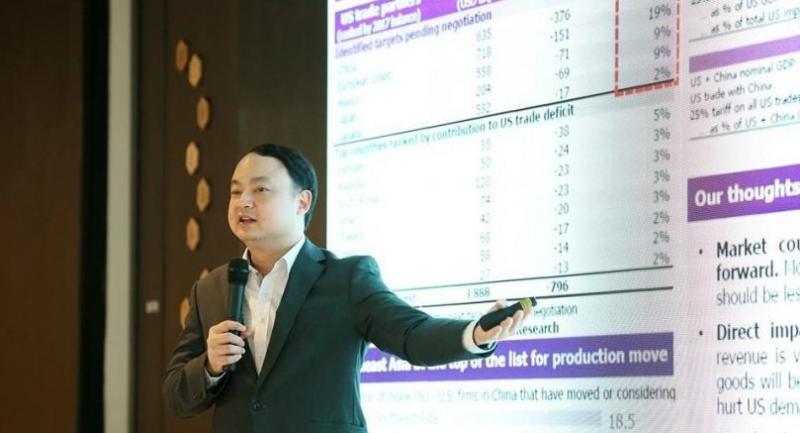 SCB Securities (SCBS) sees foreign direct investment (FDI) surging to its highest level in four years heralding an upward investment cycle in Thailand due to ongoing infrastructure investment, huge investment in the Eastern Economic Corridor (EEC), and the expected relocation of production bases from China to this region in the wake of the current US-China trade war.

In a press release from the company issued on Friday, it also forecasts the Stock Exchange of Thailand (SET) composite index reaching a record high of 2,000 points in 2019, bolstered by the upward investment cycle, sound economic expansion, a stable currency due to a strong current account balance, and the upcoming general election.

Pornthep Jubandhu, SCBS Senior Vice President, Investment Strategy Department, Research Group, said global equities have rallied continuously since they bottomed out in early 2016, providing investors with a return of more than 50 per cent.

Given the economic conditions, a crisis signal has not yet been found, particularly in Asian stock markets and including the Thai bourse, where stock valuation is more competitive than in the US stock market, the company said.

The macro statistic data released recently by the Bank of Thailand (BoT) shows local spending and investment continuing to increase robustly, with signals that Thailand is entering a new round of the investment cycle, driven by state-supported infrastructure investment, the continued push for implementation of the EEC, and the digitalisation of business organisations.

SCBS projects the SET might consolidate its position amidst external risk factors, but the index will eventually turn to rise based on domestic fundamental factors, which are expected to continue improving in 2019. The equity segment benefiting from an expected increase in capacity utilisation through private-sector investment and FDI will give sound returns based on fundamental factors.

Pornthep noted that the global economy has signalled a slowdown, but it is not critical as many have feared. The world economy is on a recovery path for the second half of the upward economic cycle as can be witnessed by the International Monetary Fund’s downward revision of the global economic estimate and its forecast of continued growth for the world economy, albeit at a slower pace following its peak in 2018.

Although the upward economic cycle has proceeded for a decade since the financial crisis in 2008, it is likely to go further because overall economies around the globe have yet to overheat and inflationary pressure remains insignificant.

Another signal that this upward economic cycle will last longer than usual is the very slow policy interest rate hike by the United States Federal Reserve. The US central bank spent up to three years deciding to raise the policy rate periodically by 2 per cent. Previously, it spent only one year doing that.

Simultaneously, the central banks of most major economies have not yet raised interest rates. The European Central Bank (ECB) is likely to raise the policy interest rate in the 4th quarter of 2019. The Bank of Japan has not yet slowed the purchase of assets concretely, while China has eased its austere financial measures upon concern the economy will be affected by a trade war with the US.

Currency fluctuations in emerging markets are another key risk factor that must be monitored. However, Pornthep said that he did not expect the problem will escalate because the currency volatility is due to specific factors in some countries which lack financial discipline and depend too much on capital inflow as a result of quantitative easing measures.

The economies of these countries might shrink when the US raises the interest rate. But for Thailand, the economy is unlikely to take the brunt of any currency fluctuation because the country has a large amount of international reserves, a small amount of foreign debt, a very high surplus in the current account balance, and a strong fiscal position.

More FDI is likely to flow into Thailand, driven by state-supported infrastructure investment projects, investment promotions under EEC-related projects, and the expected relocation of FDI into this region due to a production base shift from China upon concern over the trade war with the US.

In addition, capacity utilisation in Thailand surged to 68 per cent, the highest in four years, resulting in an increase in private-sector investment. More interestingly, the IMF made an upward revision of Thailand’s economic growth estimate this year and next year, while decreasing the global economic growth forecast.

With robust economic fundamentals, the company projected the SET index will hit an all-time high of 2,000 points in 2019 on an assumption of a price/earnings ratio of 15.6 times, bolstered by the upcoming general election and expected earnings per share growth of the market at around 8-10 per cent, in tandem with strong GDP growth.