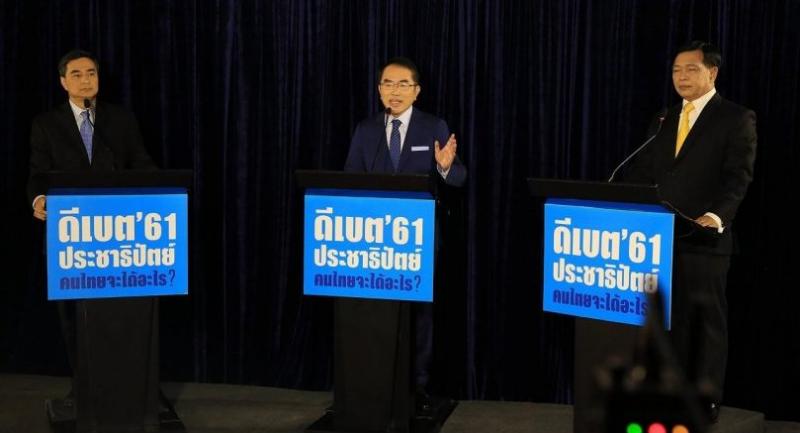 All three candidates competing to become the next leader of the Democrat Party on Friday promised not to leave the party if they lost the race.

Incumbent Democrat leader Abhisit Vejjajiva said he joined the party when he was 27 and never thought of leaving.

“My bond with the Democrat Party began when I was in primary school. This is the only political party in my life,” he added.

Warong Dechgitvigrom said the Democrat Party was his home and whatever happened, he would stay on and would help others to work for the party.

If he won the race, he would invite Abhisit and the other candidate – Alongkorn Ponlaboot – to join his team in running the party, Warong said.

“My goal in contesting this leadership race is to make our home stronger,” he said.

Answering the same question, Alongkorn said he experienced “much hardship” making his comeback to the party. The politician had been appointed by the junta to post-coup reform councils.

The trio took part in a public debate entitled “The 2018 Democrat debate: What Thais will get from it” and answered nine questions selected from party members.

The debate, held at the party’s headquarters in Bangkok, was broadcast live on the pro-Democrat, satellite television station Blue Sky Channel and its Facebook fanpage.

Responding to a question about their vision and political standpoint over the next general election, Abhisit said the political party with the highest number of MPs must get the right to form a government first.

He said the Democrat Party under his leadership would work with a coalition that can bring about benefits to the people, without any bargaining for political positions or interests.

Warong said his goal was to lead the party to an election victory and he would not allow himself to be influenced by anyone.

“I will go ahead with suppressing corruption. All political parties must respect the justice system,” he said.

Alongkorn said the Democrat Party under his leadership would not support an outsider prime minister. That would renew a political conflict and lead to a new crisis and a political “vicious cycle”.

“Under my leadership, the Democrat Party is ready to be in either the opposition or the government. Most importantly, we adhere to the public interest,” he said.