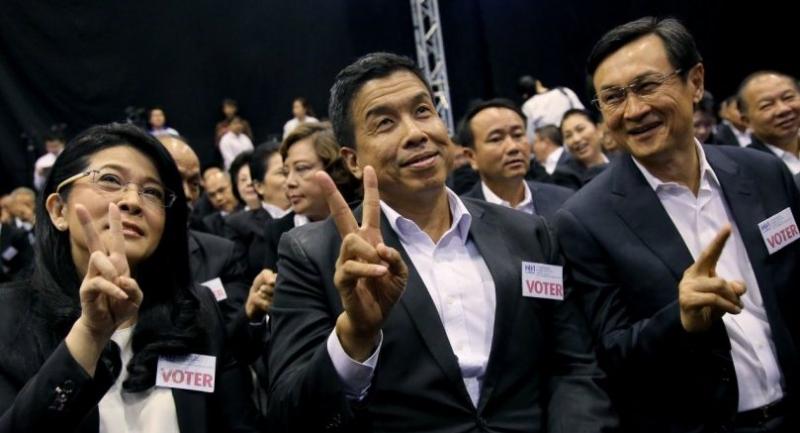 New leader Viroj Paoin says party has not violated any law; Sudarat says they will not be intimidated by threat of dissolution. Political critic Sukhum Nualsakul said the structure could be a reflection of the party’s preparation to deal with the possibility of being dissolved.

If the party were dissolved, those in leadership could face a political ban, he said. So, by placing some influential members in other positions, the camp can avoid losing important players in an unfair game, the critic added.

“This arrangement may not tell much about the party’s plan for the election. The party leader is not necessarily its PM candidate. Those three candidates could still be anyone,” he said.

Strong leadership candidates such as Khunying Sudarat Keyuraphan and Chaturon Chaisang were given different roles. Sudarat was appointed chairman of the party’s election strategy committee while Chaturon will chair the policy committee.

The names of three PM candidates, however, have not been finalised yet. After yesterday’s voting, Pheu Thai leader Viroj said the party was ready to contest the upcoming election and expressed no concern about the threat of dissolution. The party has always watched its step and abided by the law, he said.

The party is now under the scrutiny of the Election Commission (EC). If it were to be proved that the party was influenced by an outsider such as former PM Thaksin Shinawatra, the party could be dissolved – a punishment imposed by the new law.

Viroj denied that Thaksin had any connection with Pheu Thai’s internal activities.

Phumtham, meanwhile, admitted that there was a threat of dissolution. But no matter what happens, the spirit of Pheu Thai will remain unchanged and it could transform as a new entity to carry out its mission, he said.

“Nothing can destroy Pheu Thai’s spirit,” he said.

Sudarat said the party was not intimidated by the threat of dissolution. However, it was prepared for the worst-case scenario to ensure party members could get through any situation and be able to serve the people.

As head of the election strategy committee, Khunying Sudarat said she would do her best to lead Pheu Thai in the next election.

Although she did not get the official leader position as previously speculated, she said she was not disappointed. “In fact, I’ve made it clear from the first place that I didn’t want to become the leader.”

The assembly at Pheu Thai’s headquarters yesterday was joined by some 200 members. They voted veteran politician Sanoh Thienthong as the party’s chairman.

The executive selection outcome was in line with previous news leaks. Although Pheu Thai’s popular politician and former transport minister Chatchart Sitthiphan had recently been tipped as a possible leader, he did not take any leadership position.

He was not ready to lead the party as he still worked as an executive in a private company, Chatchart said. But he was willing to help with the party work, he said.