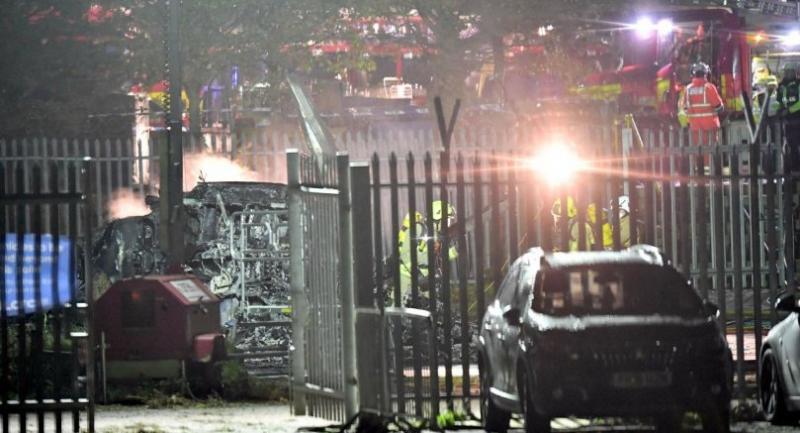 Emergency services work at the scene on the wreckage of a helicopter that crashed in a car park outside Leicester City Football Club's King Power Stadium in Leicester, eastern England, on October 27, 2018. // AFP PHOTO

No confirmation about King Power chief after his helicopter crashes in Leicester.

FEARS GREW for Leicester City’s charismatic Thai chairman yesterday after a helicopter belonging to the billionaire crashed and burst into flames in the football stadium car park moments after taking off from the club’s pitch. (FILES) In this file photo taken on May 18, 2016 Leicester City FC's owner Vichai Srivaddhanaprabha applauds as they take part in a presentation of the English Premier League football trophy at the King Power duty-free headquarters in Bangkok on May 18, 2016. - A helicopter belonging to Thai tycoon Vichai Srivaddhanaprabha crashed on October 27, 2018 near the stadium of his UK football club Leicester City. The identities of the pilot and any passengers on board have not yet been confirmed. It is also not yet known if anyone on the ground was injured.  // AFP PHOTO

There was no confirmation whether London-based Vichai Srivaddhanaprabha, who frequently flies to and from Leicester’s home games by helicopter, was on board the aircraft which appeared to develop mechanical problems.

The BBC quoted a source and a witness as saying Vichai and a group of other people boarded the blue helicopter from the centre-circle in the middle of the pitch once the stadium emptied after Saturday’s 1-1 draw with West Ham.

Leicester City said only that it was assisting police with a “major incident”, and officials at King Power, Vichai’s duty-free shopping empire, were not commenting.

This screen grab taken from handout video posted on the Twitter account of @LEO_BRUKA on October 27, 2018 shows flames coming from the wreckage of a helicopter that crashed in a car park outside Leicester City Football Club's King Power Stadium in Leicester.// AFP PHOTO

Images showed orange balls of flame engulfing the wreckage in the car park at King Power Stadium – the scene of unbridled jubilation after Leicester’s against-all-odds Premier League title victory in 2016.

“Literally the engine stopped and I turned around, and it made a bit of a whirring noise. It turned silent, blades started spinning and then there was a big bang,” freelance photographer Ryan Brown told BBC Radio 5 Live.

None of the identities of the pilot or passengers was revealed, and there was also no information about whether anyone on the ground was injured.

“I can’t get to sleep over it, because it means a lot to me, he did a lot for the club,” Leicester City supporter Kanti Patel said. Expressions of concern poured in from around the football world, in Britain and beyond.

England legend Gary Lineker, a former Leicester player and host of the BBC’s Match of the Day, tweeted: “That was the most difficult @BBCMOTD I’ve ever hosted... A terrible tragedy. Heartbreaking.”

Leicester stars Jamie Vardy and Harry Maguire both tweeted emojis of hands held up in prayer. Nualphan Lamsam, also known as Madam Pang, an influential figure in Thai football who manages the national women’s team, sent “moral support to Vichai and family” in a post on Facebook. People (L) add flowers to a growing pile of tributes outside Leicester City Football Club's King Power Stadium in Leicester, eastern England, on October 28, 2018 after a helicopter belonging to the club's Thai chairman Vichai Srivaddhanaprabha crashed outside the stadium the night before.// AFP PHOTO

Fans laid down football scarves and shirts outside King Power stadium yesterday, a day after the helicopter crash.

Dozens of candles and flowers could also be seen among the tributes, as well as an image of Ganesh – a Hindu god often found at Thai Buddhist temples.

One fan, Tom Lievers, arrived with a “Champions” scarf to pay tribute to Vichai. “Well you know where we were when he bought the club – we were absolutely nowhere. So I brought down my ‘Champions’ scarf because he made us champions.”

Andrew Aldwinckle said: “He was more like he was a supporter, a proper supporter, rather than a money man. He was one of the crowd. As far as we’re concerned, that’s it.”

“He is an important person who has raised the bar of Thai football further,” Apichart Jitratkavee, a Leicester fan in Bangkok, said. “There were projects by Leicester City to select Thai teenagers to train in the club’s academy. They will have a chance to serve the nation in the future.”

Vichai bought Leicester City in 2010 and moved to chairman the following February, pouring millions into the team and becoming a beloved figure in the club and the city – a feat not always achieved by the Premier League’s foreign owners.

The local ambulance service said it was alerted of an accident about 75 minutes after the final whistle blew.

Leicestershire police said yesterday the Air Accidents Investigation Board, which probes civil air aircraft accidents, would lead the investigation. It was under Vichai’s ownership that Leicester crafted one of the biggest fairy-tales in English football history by winning the 2015-16 Premier League, after starting the season as 5,000-1 outsiders for the title.