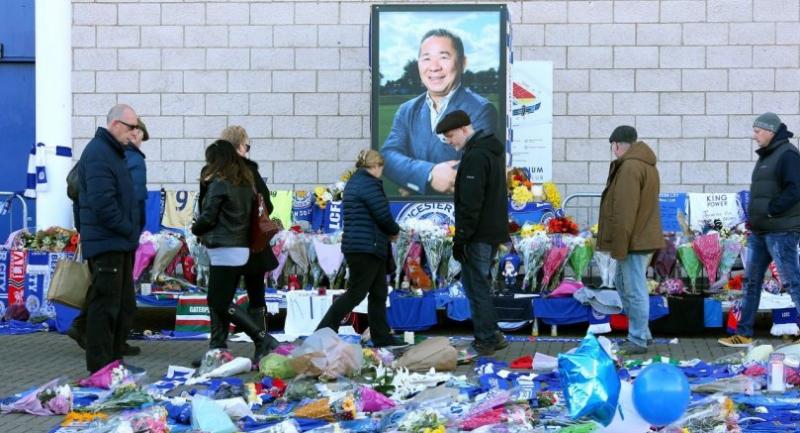 People look over flowers, tributes and messages of condolence outside the King Power stadium in Leicester, Britain, 29 October 2018. // EPA-EFE PHOTO

By The Nation
Agence France-Presse
LEICESTER

Prince William among those paying homage, as Leicester mourns death of their Thai boss in helicopter crash. A portrait of Leicester City Football Club's Thai chairman Vichai Srivaddhanaprabha, who died in a helicopter crash at the club's stadium, is seen amid flowers and tributes outside the King Power Stadium in Leicester, eastern England, on October 29, 2018. // AFP PHOTO

THE EXTENT to which Vichai Srivaddhanaprabha was held in high esteem became apparent yesterday when his death in a helicopter crash generated headlines in newspapers and TV stations across the globe.

Several hours after the horrific incident, Leicester confirmed people’s worst fears – that Vichai and the four other people on board had indeed lost their lives. “The world has lost a great man,” the club said.

“Leicester City was a family under his leadership. It is as a family that we will grieve his passing and maintain the pursuit of a vision for the club that is now his legacy.”

TV networks, including CNN, interrupted programmes with the breaking news and a stream of fans already fearing the worst soon started laying out flowers, football scarves and Buddhist prayers outside the club’s stadium.

They expressed their heartfelt tributes to the man they credited for their fairytale Premier League victory in 2016 as surely as if he had been one of their own.

Among those touched by the tragedy was Prince William, a friend of Vichai and himself a helicopter pilot. The prince said Vichai had made a “big contribution” to not only football, but also local charities. “My thoughts today are with the family and friends of Vichai Srivaddhanaprabha and all the victims of the terrible crash at Leicester City Football Club,” William said.

“I was lucky to have known Vichai for several years. He was a businessman of strong values who was dedicated to his family and who supported a number of important charitable causes.” A portrait of Leicester City Football Club's Thai chairman Vichai Srivaddhanaprabha, who died in a helicopter crash at the club's stadium, is seen amid flowers and tributes outside the King Power Stadium in Leicester, eastern England, on October 29, 2018. // AFP PHOTO

Leicester and England striker Jamie Vardy, one of the heroes of the 2016 championship success, added on Instagram: “Struggling to find the right words ... but to me you are legend, an incredible man who had the biggest heart, the soul of Leicester City Football Club.

“Thank you for everything you did for me, my family and our club. I will truly miss you ... may you rest in peace ... #theboss”.

The impact made by Leicester’s remarkable rise under Vichai across the continent was reflected, as Spanish giants Barcelona and Real Madrid both expressed their condolences.

“The club wants to show their condolences to his family, his friends and all the Leicester fans,” said European champions Madrid.

“Our thoughts are with the whole @lcfc family. Rest in peace,” Barca posted on Twitter.

A book of condolences will be opened at the stadium today and the team has postponed an upcoming Cup fixture against Southampton as it comes to terms with the tragedy.

“Everyone at the club has been truly touched by the remarkable response of the football family, whose thoughtful messages of support and solidarity have been deeply appreciated at this difficult time,” the statement said.

Police named the four other victims as Nursara Suknamai and Kaveporn Punpare, two members of Vichai’s staff, pilot Eric Swaffer and passenger Izabela Roza Lechowicz. Police have already handed the file over to air accident investigators, while some eyewitnesses hailed the pilot as a hero for steering the plunging helicopter away from the still-busy stadium.

One newspaper, the Daily Mirror, described Swaffer as a veteran pilot with many years’ experience, who previously flew members of the Royal Family and celebrities.

Vichai, 60, the owner of Thailand’s King Power duty-free empire, was a regular at matches who used to fly to and from home games. The blue chopper took off from the middle of the pitch once the stadium had emptied after a game against West Ham.

Eyewitnesses said the helicopter appeared to develop a mechanical problem in its rear propeller shortly after takeoff.

Images showed orange balls of flame engulfing the wreckage in the car park of the stadium where just two years ago Leicester had celebrated the most unlikely of Premier League title triumphs. A man kneels with a statue of the Buddha and devotional scripture in front of the floral tributes gathered outside Leicester City Football Club's King Power Stadium in Leicester, eastern England, on October 28, 2018 after a helicopter belonging to the club's Thai chairman Vichai Srivaddhanaprabha crashed outside the stadium the night before. // AFP PHOTO

Football fans in Bangkok said Vichai had helped develop the sport in Thailand as well, bringing the Southeast Asian country greater recognition in the sporting world.

“He is an important person who has raised the bar of Thai football further,” said Leicester fan Apichart Jitratkavee. Chamat Uchukan-okkul, 39, said Vichai had been “an inspiration to Thais ... he showed that we can do anything if we set our minds to do it”.

Vichai bought Leicester City in 2010 and became chairman the following February, pouring a fortune into the team. It was under Vichai’s ownership that Leicester crafted one of the biggest fairytales in English football history by winning the 2015/16 Premier League.