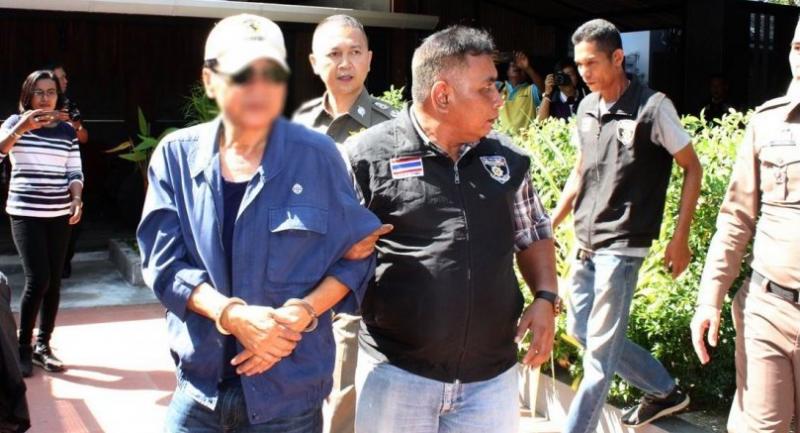 A 62-year-old Thai man has been arrested in Phuket after shooting and killing a soldier who was his wife’s lover.

The incident happened in Sa Kaeo province on the Cambodian border.

Police and rescue workers arrived to find blood on the floor. Fifty-six-year-old Lieutenant Samueanchai Pueadpean, a soldier from Burapa Command in Sa Kaeo, who had sustained serious injuries from gunshot wounds, had already been rushed to Watthana Nakhon Hospital, where he was later pronounced dead.

Phuket police tracked down and arrested Utane Jitman, a restaurant owner, at a hotel in Rassada, following an arrest warrant that had been issued by Sa Kaeo Provincial Court on Friday.

The arrest warrant cited intent to murder and illegal possession of a firearm in the list of charges.

Utane will now be transferred back to Watthana Nakhon police in Sa Kaeo.

Utane tearfully told police that he and his wife had been together for many years, and that he had launched a restaurant with her over the past two years.

Utane was working away from home a lot of the time. When he called his wife saying that he was coming back, he said she had replied: “You don’t have to come back.”

When Utane returned to the restaurant in Sa Kaeo, which was closed at the time, he discovered a car parked in front.

He then found Samueanchai in the bedroom upstairs with his wife, he told police.

He took a gun from the room and tried to shoot at Samueanchai, but it misfired. Samueanchai then shot back at Utane.

Utane then found another gun and returned fire. This time his shots wounded Samueanchai, fatally.

Utane told police officers that he was going to surrender to the police as he was afraid someone might try to kill him.