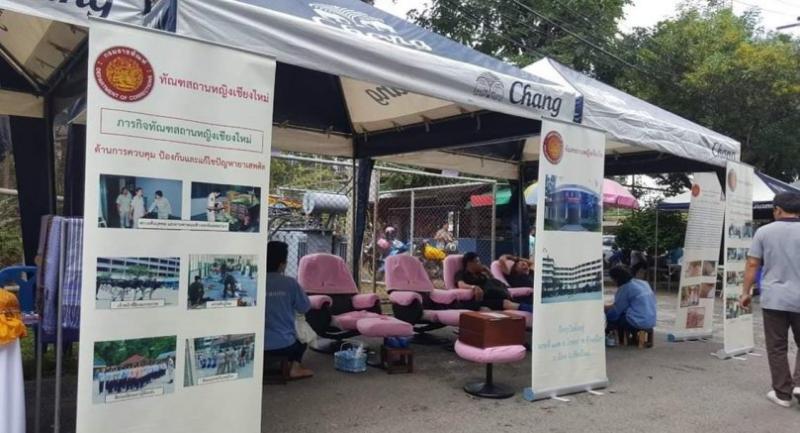 FORMER CONVICTS who have undergone training as masseurs while behind bars will get a better shot at rebuilding their lives now that the Cabinet has removed a requirement that they wait for at least a year before taking up jobs in the health industry.

The act, which went into effect in March 2016, became a hotly contested subject because it prohibits former convicts from owning, or working at, massage parlours and spas. This is despite the fact that nearly 1,000 female inmates become trained masseuses each year and count on getting jobs in this profession after release. Lawmakers said the original legislation was introduced to control standards at health service establishments but that argument was dismissed by Naowarat Thanasrisudarat, former director of the Chiang Mai Women Correctional Institution.

Naowarat, who owns “Lila Thai Massage” and has recruited 600-700 former convicts as masseuses, says they earn at least Bt500 per day and many have been able to send their children to university as a direct result.

“In my 10 years running these massage parlours [there are six branches of Lila Thai Massage], I can 100 per cent confirm that no former convict working with us has stolen anything,” Naowarat was quoted as saying in an article published last year by the Sexuality Studies Association (SSA).

“In fact, many even returned expensive items that were misplaced by owners.

“Discrimination [due to this law] will lead to ex-convicts finding their way back to prison. I can confirm that if former convicts have a job, they won’t re-offend.”

In the SSA article, Charnchao Chaiyanukij, then-permanent secretary at the Justice Ministry, cited Japan as rarely having re-offenders because they had a home and a job to go back to.

Former convicts are also barred from taking up several other professions, such as becoming lawyers, civil servants, doctors, police officers, teachers or getting jobs in the public transport sector.

The law explains the purpose of the ban was “to protect the professions’ integrity”.

Yet, Thai prisons allow inmates to complete a long-distance bachelor’s degree with Sukhothai Thammathirat Open University, and, ironically, the subject of choice for many is law. Of the 2,151 prisoners who graduated in 2016, 728 obtained a law degree, according to the Corrections Department.

A former drug convict recounting her time at a correctional institute, said only 15 per cent of the inmates could earn a higher allowance by doing handicrafts or baking.

The rest, deemed “unskilled”, had to do other jobs such as stitching and packing products and earned only Bt8 a day. She said it was impossible to save any money, as they also had to buy basic necessities. Furthermore, inmates were required to retain an account balance of less than Bt9,000 in order to prevent drug traffickers from using them for money-laundering purposes. Former convicts therefore never have enough to start a business when they are released, she said.

One former convict, Porntip Mankhong, said re integrating ex-cons into society was not out of the question, provided related government agencies worked together to build people’s confidence.

“There has to be a way to ‘restore humanity’ to the former convicts before they are sent out, because they have no confidence, no energy to live nor a place to go to,” said Porntip.

“Those who have been behind bars for decades have no idea how the world outside has changed. There has to be a process to prepare and rehabilitate them after having been suppressed and treated as non-humans for so long.”