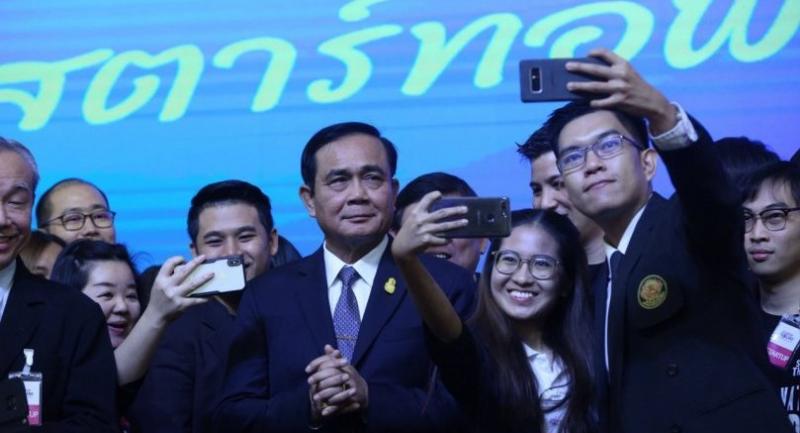 PRIME MINISTER Prayut Chan-o-cha yesterday distanced himself from a claim by his deputy Somkid Jatusripitak that the next head of government would “look similar” to the current one.

General Prawit Wongsuwan, another deputy premier, said Somkid had shared the same thoughts as “many of us” although he would not specify what he thought regarding the matter.

General Prayut was asked to comment on Somkid’s “premonition”, to which he responded calmly: “They may look similar but are they the same person?”

Deputy PM Somkid, who heads the government’s economic team, said on Wednesday that he “has a premonition that the next prime minister will look similar to the current one”. He was delivering his address at a conference attended by business executives and investors at a Bangkok hotel.

Prawit, who is in charge of security affairs, said the junta’s political restrictions would be completely relaxed by early December, to pave the way for campaigning in the run-up to the general election, which has been tentatively scheduled for February 24.

Meanwhile, the Election Commission (EC) is preparing to hold a meeting with political parties on November 22, the agency’s secretary-general Jarungvith Phumma said yesterday.

He said a variety of issues would be discussed at the meeting, including primary voting to select election candidates, campaigning through electronic media and debates on public television stations.

Asked to comment on reports that the government and ruling junta National Council for Peace and Order intend to call a meeting with the EC and parties in early December, Jarungvith said his agency has not been informed about that.

He also said that he expected the EC to designate all the constituencies throughout the country early next week. The senior official maintained that the agency was dealing with the matter carefully and abiding by the Constitution and relevant regulations to ensure fairness to all parties.

Jarungvith added that any political party which suspects unfairness involving the designation of certain constituencies may file a complaint with the EC.

In a related development, the Democrat Party was yesterday forced to postpone its voting to sound out party members on who should become its new leader due to a software glitch that affected all the computers at party offices throughout the country.

The party’s election committee called a press conference at the party’s headquarters before noon to apologise for the first-day fiasco. But the panel’s members maintained that the postponement would not affect the Democrat Party’s annual general assembly scheduled for November 11 to elect the new party leader and other executive members.

The Political Parties Act requires that executive members of political parties will be elected by their general assembly. However, the Democrats have agreed that the upcoming general assembly must

base its decision on the result of sounding out party members. Old and new Democrat members, totalling about 2.5 million, are eligible to vote.

Democrat members gathered yesterday morning at the party’s headquarters and at offices in Bangkok, central and northern provinces on the first day of voting. Many of them became agitated after learning about the computer glitch, which led to the postponement.

Chumpol Kanchana, who heads the party’s election committee, said that due to the computer problem, the panel had resolved to postpone voting until November 9. However, he added, it was believed that the postponement would not affect the party’s general assembly scheduled for two days later.

Thana Cheerawinit, a member of the election committee, told reporters that the voting machines had been imported from England and were set to that country’s time zone, which has a five-hour difference with Thailand. That would affect the voting, which is open from 8am to 6pm Thailand time.

He said all the 230 such machines needed to be returned from branch offices to the party’s HQ to readjust the time zone to Thailand’s, before voting could begin.

The recall of the machines and the time-zone readjustment would not affect voting by party members in the southern and northeastern provinces, which is scheduled for November 5, Thana said.

Jermmas Juenglertsiri, secretary of the election committee, said that although voting took place on different days, there would be no chance of someone tampering with the system. She explained that votes cast would be sent to a blockchain system with high-security features.

“Nobody will be able to fix the votes or know the result in advance,” she said.