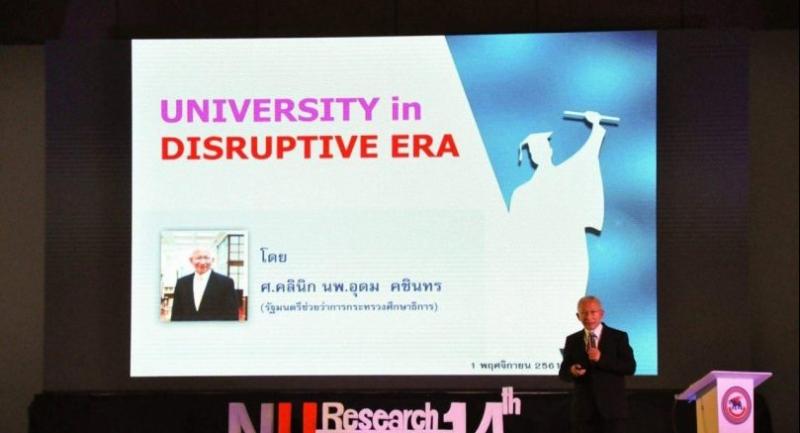 DISRUPTIVE TECHNOLOGIES are going to bring down Thai universities’ rankings – no matter how well regarded they are now – unless they adjust quickly and efficiently, Deputy Education Minister Udom Kachintorn has warned.

“For one thing, Thailand’s birth rate has fallen drastically,” Udom said at the 14th NU Research Conference, “For another, technologies have evolved to a point that people can learn anytime, anywhere”.

Held by the Naresuan University, the event took place late last week and examined the theme “University in Disruptive Era”.

“Disruption has been moving fast. If universities do not adjust, they should not expect the government to help them out,” Udom said.

He pointed out that there was a high possibility that some universities would be closed and some would be merged. Udom said the trend had already begun in many countries. He said in France’s Bordeaux region, the number of local universities had already dropped from four to just one.

In his opinion, Thai universities will see clear impacts of disruption within the next five years. “Two decades ago, about one million children were born in Thailand each year. But now just about 600,000 are born annually,” Udom said.

He said, given that just a little over half of children born today would enrol in university for a bachelor’s degree, universities must realise they need to implement big changes.

He said universities must focus on upgrading the skills of 35 million working people in the country instead of competing to attract secondary-school graduates, whose numbers have similarly been in decline in recent decades.

“Let’s also focus on the elderly. Thailand’s elderly population is growing. Let’s equip them with skills that can help them continue earning a living,” he said.

Udom said the government would be willing to offer a Bt10,000 subsidy per participant for six-month courses that promised to prepare the workforce for current and future needs. Udom lamented that the country’s higher-education sector had not supported the country well in regard to human development and competitiveness.

He revealed that, when looking into details, the sector scored just 6.9 out of 100 points in terms of “attractiveness” in the infrastructure-efficiency field, according to the latest World Competitiveness Ranking.

Compiled by IMD, the ranking put Thailand in 30th place – a slip from 27th last year.

Neighbouring Malaysia had meanwhile risen to 12th from 22nd a year earlier.

“Thailand scored 28.3 out of 100 points in the talent-formation index,” Udom said.

He said several foreign investors were interested in investing in Thailand’s Eastern Economic Corridor, which now offers tempting privileges to investors, but they’re worried about the size and skills of the workforce.

“Otherwise their graduates will become second-class workers in the future.”

“Social-science students should account for no more than half |the total student population,” he said.

He pointed out that, because social-science students accounted for 70 per cent of total student numbers today, many graduates in the field remained unemployed.

“Besides, we need science graduates to drive the country forward,” he said.

The government has already identified 10 industries as key drivers for the country’s growth.

They are: Next – Generation Automotive; Smart Electronics; Affluent, Medical and Wellness Tourism; Agriculture and Biotechnology; Food for the Future; Robotics; Aviation and Logistics; Biofuels and Biochemicals; Digital; and Medical Hub.

Udom said chief executives of various corporations had told him that current graduates did not truly respond to their needs.

“They say they have had to train new staff between six months and one year before they can actually work fine,” he said.

“It’s about learning by doing” he said.

He even suggested that universities consider two-year courses for a bachelor’s degrees.

“Some Australian and Singaporean universities have already done this,” he said.

Udom said the Office of Higher Education Commission (Ohec) had adjusted a lot and would allow such programmes.

“Now we’re waiting for the universities to make the move,” he said.

He also recommended the provision of online courses, the use of innovative learning materials and greater focus on soft skills.

Thammasat University has come up with a plan to use new curricula that will require students to learn at participating companies for one full semester, allow them to independently enrol in courses they’re interested in, and increase online learning. The goal of the new curricula is to ensure graduates can work efficiently in the 10 industries that Thailand plans to promote.

At Chulalongkorn University, the Faculty of Arts is letting outsiders enrol in courses it offers as it tries to adjust to changing circumstances.

Several other educational institutes are reportedly also making moves to deal with disruption.