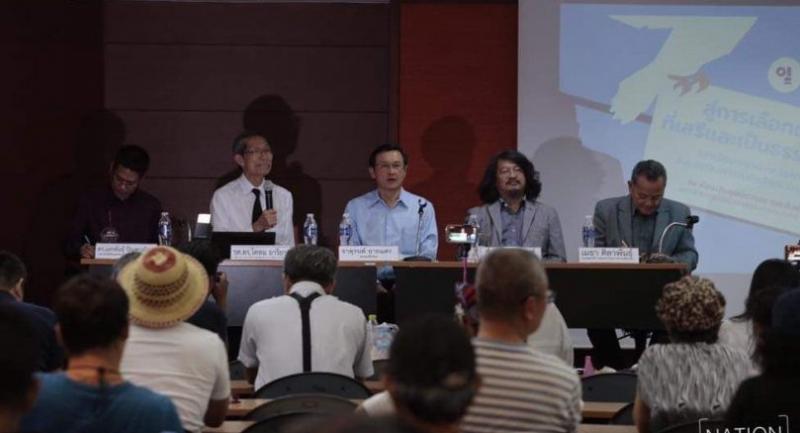 AS THE COUNTRY counts down towards the next general election, speakers at a panel discussion yesterday widely held the opinion that a free and fair national vote without the influence of the ruling junta seems unlikely.

The speakers at the event entitled “Towards a Free and Fair Election: Situation in Thai Society” said the post-coup government had yet to lift the ban on political activities and by extending its control over the Election Commission (EC) has drawn up an “unfair” system.

They called on international agencies to observe the election, which has been tentatively scheduled for February 24.

“To be free and fair, there must be equal access to national media, resources, a fair election-supervising authority, as well as political freedom of electorate, candidates, and political parties,” said Sunai Phasuk, Asia Division senior researcher of Human Rights Watch.

But as freedom of expression, association and assembly – the main characteristics of a democratic society – remain blocked, Thailand should have other countries coming to observe the electoral process, he said. Sunai was speaking at the panel discussion held at Thammasat University (TU).

Following the 2014 military coup, democratic countries such as the United States, members of the European Union, Japan and Australia have criticised the junta. They have called for free and fair elections that would lead to the formation of a democratically elected civilian government.

Chaturon said he did not think the upcoming election would be a free and fair one.

The national vote was drawing closer but political parties can’t even communicate their policies to the people, he said. “The bans on political campaigning when the election is drawing near point to a lack of democracy and fairness.”

The veteran politician said the government needed to restore freedom of expression, association and peaceful assembly as well as lift other bans imposed on political parties.

Gothom, a former election commissioner and peace campaigner, yesterday also called on the EC to help prevent people in power from taking advantage over other political players in the run-up to the next election.

He said that in order to ensure fairness, the junta government must not interfere in the work of the EC. “How can the |EC work if they are afraid of being dismissed from their positions?” he asked.

In March, EC member Somchai Srisutthiyakorn was removed from office by junta leader General Prayut Chan-o-cha for “causing confusion” regarding the election date.

TU political scientist Janjira said elections are often used as a means to give legitimacy to authoritarian governments and keep them in power.

She said in many countries in Eastern Europe and Asia, authoritarian governments allow elections to take place but influence the results by controlling the election supervising authorities, tampering with election results, controlling the media, and blocking international agencies from observing the voting.

Matha, of the EC, told yesterday’s discussion that the agency was already well prepared for the next election.

“We have found no obstacles in holding the election. And in this upcoming election, the EC has tools that would make it easier for us to work,” he said, referring to a new law that increases its powers.