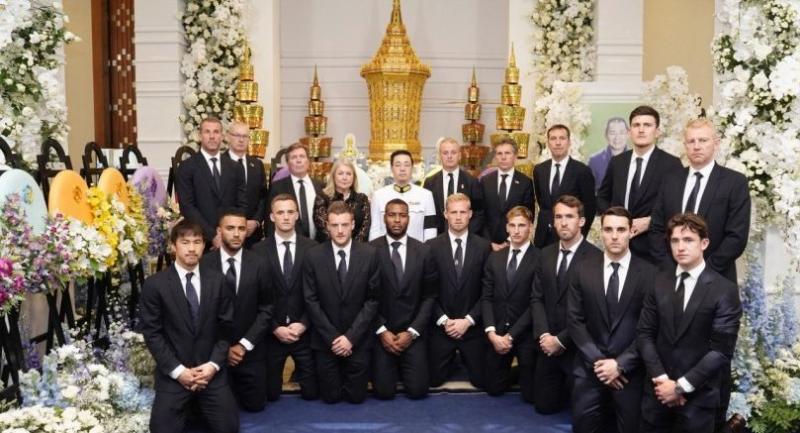 LEICESTER footballers yesterday attended the funeral in Bangkok of their chairman Vichai Srivaddhanaprabha who died in a fiery helicopter crash at their home King Power Stadium last Saturday.

They left England for Bangkok after an emotional 1-0 win over Cardiff in their first game after the crash that killed two others passengers and two pilots. They will go back to England around the middle of this week to prepare for a game with Burnley – their first home game after Vichai’s passing. The footballers were seen walking to a sala inside Debsirindrawas Ratchaworawiharn Temple in Bangkok where the royally sponsored funeral was held.

Vichai’s body was flown home on a private jet on Friday and the funeral rites were conducted at the temple while the Abhidhamma Recitation Ceremony will be held every night from yesterday until Friday, three of the nights being royally sponsored. The royally sponsored cremation rites will be confirmed at a later date.

Leicester goalkeeper Kasper Schmeichel said on Saturday after the game that he was glad his team had won the match to get three points for Vichai. Schmeichel said he was shaking in his boots during their warm-up before the game and was in tears during the minute’s silence before kick-off, BBC reported.

During the pre-match warm-up, Leicester players wore T-shirts with an image of Vichai’s face and the words “The Boss”.

Leicester players and backroom staff lined up around the centre circle for a minute’s silence with the Cardiff team after the laying of wreaths, while fans of both teams unfurled their banners.

The Leicester City footballers travelled to Bangkok after Saturday’s game to attend Vichai’s funeral. Dane Schmeichel said: “Everyone grieves in different ways and the opportunity was given [to go for the funeral] and we wanted to go. We are a family and wanted to pay our last respects together.

“It was nice to get a win to take to Thailand now and hopefully we did his family proud,” Schmeichel added.

“You couldn’t ask for a better chairman. There are few people who come along in this life that have an impact on you. He had that on me and so many people, and the outpouring of grief around the world shows that,” he said, according to the BBC.

On Saturday, Demarai Gray scored the winner on 55 minutes and removed his jersey to reveal an undershirt bearing the words “For Khun Vichai”.

After the final whistle, the Leicester players and backroom team stood and applauded with their fans long after the game had ended.

“I feel just an overwhelming sense of pride of being part of the family that Vichai built and the extended family of Leicester City.”

Club captain Wes Morgan said: “We were very close to the chairman. We know what his wishes were. He used to come down at home games, have a joke and laugh, and always say, ‘I want a win and three points’. We did that today... We had to try to hold our emotions and do the best we could.”