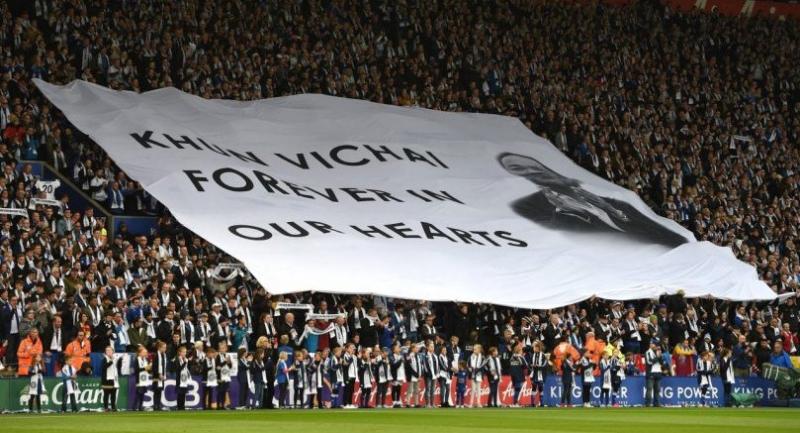 ans observe a minute's silence to remember the victims of the Leicester City helicopter crash which killed Leicester City Chairman Vichai Srivaddhanaprabha, and for Remembrance Day at King Power Stadium in Leicester Saturday./AFP

Leicester City fans fell silent on Saturday in a heartfelt tribute to late owner Vichai Srivaddhanaprabha before the first home match since he was killed in a helicopter crash two weeks ago.

A special "Tribute to Khun Vichai" video was shown on big screens before kick-off against Burnley, two weeks after the tragedy, which took place moments after the helicopter had taken off from the pitch at the King Power Stadium.

A huge banner was unfurled reading: "Khun Vichai, Forever in our Hearts."

Then the entire stadium fell silent, with fans turning the stands into a sea of white, holding aloft special scarves in memory of their late chairman and to remember servicemen and women killed in wars on the 100th anniversary of the end of World War I.

Earlier, supporters braved the pouring rain as they made their way through the streets towards the ground for the first home match since the tragedy holding Leicester flags and wearing club shirts, some with "Vichai" on the back.

There was a subdued atmosphere but pockets of chanting, including "We love you Leicester, we do", "I'm Leicester till I die" and simply "Vichai".

Under Vichai's ownership, Leicester produced one of the biggest upsets in English football history by winning the 2015/16 Premier League, having started the season as 5,000-1 outsiders for the title.

Saturday's walk was called the 5,000-1 walk in recognition of that astonishing achievement.

The charismatic Thai had become a beloved figure in the club and the city -- a feat rarely achieved by Premier League clubs' often distant billionaire owners.

"No chairman has done what he's done with Leicester City. I respect all he's done and not just for the football club, also charity-wise," said fan Jake Tilson, 35. "He's a legend."

"I think football can learn from him and the way he gave to the local community."

Another supporter, Don Martin, said: "It seems like it's a celebration but it's one of the saddest days for the club. It's recognition for the chairman.

"I'm confident about the future. Top (Vichai's son) and the rest of the family will carry on his father's legacy. There is no doubt about that," added the 57-year-old.

On Friday, the club announced plans to erect a statue of Vichai at the stadium.

His son Aiyawatt, the club's vice-chairman who is known as Top, wrote in Saturday's match programme: "We will never be able to repay what he did for us -- for me as his son, us as his family, everyone connected to Leicester City and beyond -- but we are committed to honouring his memory and upholding his legacy."

Manager Claude Puel wrote: "He (Vichai) may not be here in person today but he will be here in spirit and we will carry his essence in our hearts."

Vichai was among five people killed when the helicopter plunged to the ground in a car park just outside the stadium following Leicester's match against West Ham on October 27.

The team, currently 10th in the Premier League, returned to action last weekend, beating Cardiff 1-0 away.

A number of players, including Jamie Vardy and Kasper Schmeichel, and manager Puel travelled to Thailand to attend Vichai's funeral.

Schmeichel has been especially affected, having watched the helicopter take off from the pitch before it appeared to go into a fateful spin.

"I was on the pitch and I waved him off," said Schmeichel. "I saw it all happen. It is something that will stay with me, unfortunately."

Mourners have turned Leicester's stadium into a shrine to Vichai, carpeting the ground with floral tributes and messages of thanks.

Stories have emerged of his acts of generosity to the club's supporters and players and sizeable donations he made to local hospitals.