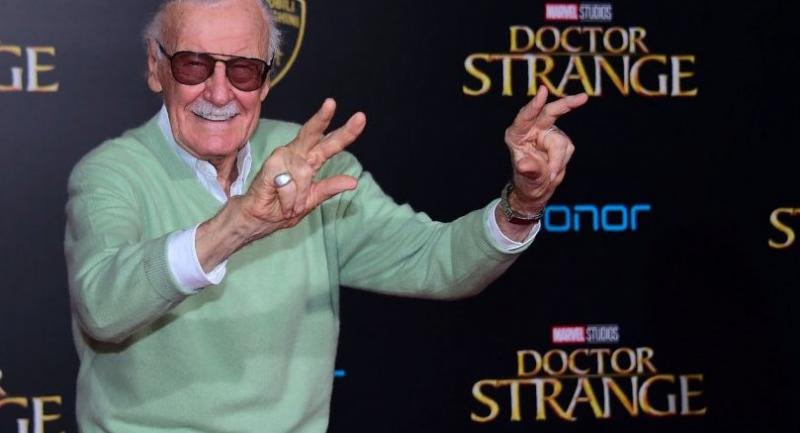 In this file photo taken on October 20, 2016 Executive Director of the film, Stan Lee poses for photographers at the world premiere of Marvel Studios 'Doctor Strange' in Hollywood, California./AFP

Marvel legend Stan Lee, who revolutionized pop culture as the co-creator of iconic superheroes like Spider-Man and The Hulk who now dominate the world's movie screens, has died. He was 95 years old.

Lee, the face of comic book culture in the United States, died early Monday in Los Angeles after suffering a number of illnesses in recent years.

"With a heavy heart, we share our deepest condolences with his daughter and brother," said Marvel Comics and its owner The Walt Disney Company in a statement.

"We honor and remember the creator, voice and champion of Marvel... Every time you open a Marvel comic, Stan will be there."

The New Yorker, known for his distinctive tinted glasses and impish grin, ended up in the comics business by accident, thanks to an uncle who got him a job when he was a teenager filling artists' inkwells and fetching coffee.

"I felt someday I'd write the 'Great American Novel' and I didn't want to use my real name on these silly little comics," Lee once said, explaining why he had forsaken his given name, Stanley Lieber.

Lee rose through the ranks to become a comics writer -- making millions of superhero fans dream of his fantastic universes and humans with extraordinary powers -- and eventually led the Marvel empire for decades as its publisher.

From Spidey to Black Panther to the X-Men and the Fantastic Four, Lee collaborated with other authors and illustrators to put his lively imagination on the page.

Iron Man, Thor and Doctor Strange would follow -- and today, all three heroes have multi-film franchises that rake in hundreds of millions of dollars.

"Stan Lee was as extraordinary as the characters he created," said Disney CEO Bob Iger. "A superhero in his own right to Marvel fans around the world, Stan had the power to inspire, to entertain, and to connect."

Lee has appeared in cameo roles in nearly every movie in the Marvel Cinematic Universe -- including as a bus driver in "Avengers: Infinity War," a film that united many of the indelible characters he brought to life.

"I used to be embarrassed because I was just a comic book writer while other people were building bridges or going on to medical careers," Lee said.

"And then I began to realize: entertainment is one of the most important things in people's lives. Without it, they might go off the deep end."

Born on December 28, 1922 to Jewish immigrants who migrated to the United States from Romania, Lee got that first assistant's job at age 17 at Timely Comics and began rising through the ranks.

After a stint in the US Army during World War II Lee returned to comics, teaming up with illustrator Jack Kirby in the 1960s to invent the Fantastic Four and Spider-Man.

It was a partnership for the ages -- Kirby, the artist, was "The King" and Lee, the writer, was "The Man."

Together they would pioneer new ways to tell stories, with deeply flawed heroes and serious themes -- all while maintaining the wonder of traditional superhero lore. Even villains showed complicated feelings.

"When the time came to create a teenaged hero for Marvel Comics, I decided to depict him as a bumbling real-life teenager who by some miracle had acquired a super power," Lee wrote in a 1977 column, "How I Invented Spider-Man."

"If you suddenly gained the muscle power of a hundred men and could outwrestle King Kong, it doesn't mean you still wouldn't have to worry about dandruff or acne, right?

Lee and his collaborators churned out hit after hit and he took over at Marvel in the 1960s, creating the "Marvel Universe" -- all of the heroes existed in the same time and story crossovers were frequent.

It's a model now adopted by the Hollywood producers beyond the Marvel Cinematic Universe -- which releases its 21st film, "Captain Marvel," in March next year.

Lee formally left Marvel in the 1990s but remained chairman emeritus. He was the brand's most recognizable face, giving lectures and speaking at comics conventions.

"My father loved all of his fans," his daughter JC told Hollywood celebrity news portal TMZ. "He was the greatest, most decent man."

In recent years, as Lee reached his 90s, he ran into legal troubles and scandal. A massage therapist sued him for sexual assault, accusing him of inappropriate touching during two sessions in 2017. Lee denied the allegations.

There were also claims that people around the Marvel legend -- who was worth tens of millions of dollars -- were trying to access his wealth, and that he was the victim of elder abuse at the hands of his manager and his daughter JC.

Hollywood quickly took to social media to pay tribute to the late superhero of comics.

"My youth wouldn't have been the same without him. So grateful to have met the guy, and told him how thankful I was for his work," tweeted Australian filmmaker James Wan.

Edgar Wright, the British director of "Shaun of the Dead" and "Baby Driver" used Lee's catchphrase in his eulogy: "Thanks for inspiring so many of us to pick up a pen or pencil and put your dreams onto paper."