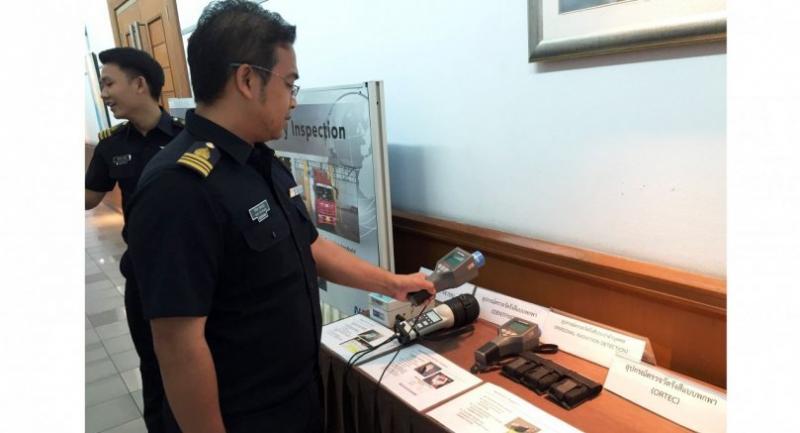 THE RADIOACTIVE waste found at Chon Buri’s Laem Chabang Seaport has been analysed though more investigation is required to track its origin and movement, the authorities said. Customs Department, Office of Atoms for Peace (OAP) and the Port Authority of Thailand told the press yesterday that only one piece of radioactive material was found inside the aluminium scrap heading to India, and that it has been kept behind for further investigation. According to the Nuclear Society of Thailand, Cs-137 is commonly used in industrial measurement devices and as a radiation generator for cancer radiotherapy.

Cs-137 has a half-life of about 30.17 years (the amount of time required for the radiation level of the material to lower by half).

“Since every cargo that passes through our port has to be scanned by the Radiation Portal Monitor, we detected that this aluminium scrap cargo had unusually high radiation level, so we alerted OAP and TINT [Thailand Institute of Nuclear Technology] to examine the cargo,” Yuttana said.

“After we found and analysed this radioactive material, it was put inside a safe container and kept at the TINT headquarters for further investigation, so we can find more evidence about its origin.”

He also said that right after the radioactive material was detected, OAP, which deals with radioactive waste directly, filed a police complaint against the exporter on charges of violating customs and OAP laws.

Though authorities believe there might be more accomplices in the illegal transboundary movement of radioactive waste, this incident is not expected to have any connections with the network trading in hazardous waste.

“We are now investigating where this radioactive material came from and how it ended up inside the cargo to India without being noticed before,” he said. “We are going to expose the entire route of the smuggling of radioactive waste.” Pisit Suntarapai from OAP’s Radiation Safety Regulation Bureau said investigators found 30 bags of aluminium scrap in the cargo, but there was only one piece with Cs-137 in the form of a small needle-shaped piece of metal around five centimetres long and weighed about 200 grams.

“Even though this piece was found without a protective shield, but it was still covered inside an aluminium shell, so not much radioactive material was leaked,” Pisit said.

“We have also closely examined the cargo and found no substantial radiation contamination, so we can say this radioactive waste is of a very low threat to the environment and people’s health,” he added.

Pisit said specialists from OAP and TINT had spent some 30 hours examining and retrieving the waste, and that the next job would be to find the imprinted serial number so the origin of the material can be traced.