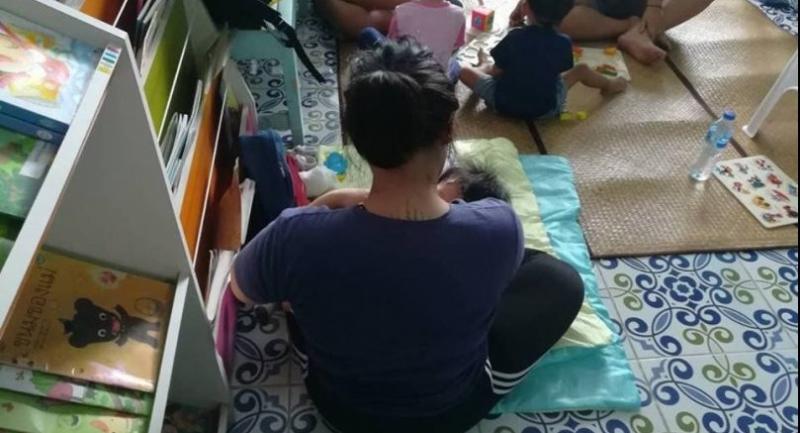 STRESSED TEENAGED moms in a Chiang Mai community have a place of refuge in the Wai Sai Centre, which offers group counselling, along with education on safe sex and family support.

There are 52 teen moms under the centre’s care. The moms meet in groups of around 15 people – teens, teen parents, and their parents – where they sit in a circle and share their experiences, offering each other a nod or a hug and ask each other advice related to safer sex and child rearing.

“Some teens have no idea how to wash their kids’ dirty clothes. A couple of them were devastated and suicidal,” Sudaporn Narkfak, one of Khon Wai Sai counsellors at the centre, said. She is referred to by teen mom as “Aemmy”.

The centre was founded back in 2006 by the network of Thai Health Promotion Foundation (ThaiHealth), Women Health Advocacy Foundation (WHAF) and the community. The Centre is in a one-storey house painted in bright blue in Mae On District, Chiang Mai.

Many teen moms suffer from stress related to the judgement they faced from their friends, themselves and their communities, says Sudaporn.

A Wai Sai officer said their job was to make the girls realise their value – and that being a teen mom has some bright sides, too.

“I feel like I’m very mature now that there is a baby I have to care for,” said a teen mom as her little boy sat on her lap. She had dropped out of secondary school but is now studying at a state-owned non-formal education centre to get a high-school diploma.

Many times, parents are so angry at their child that the family bond suffers. Wai Sai Centre then works as a bridge for the girls and their parents.

“At first I didn’t want to see my daughter’s face at all, but I met other girls and their mothers and realised we were not alone,” admitted the mother of a teen mom.

Another mission for officers at Wai Sai Centre is to help the girls access government funds for newborns such as the Bt600 monthly grant for the newborns of a poor family.

They also give safer-sex education and referred the girls to Sarapee Hospital for birth control and advice on nutrition during pregnancy and after.

However, there are problems the centre cannot tackle, said Sudapon. Only a handful of the young moms went back to school, or to a non-formal education centre or college. Most must stay at home or work in a low-paid job.

Lack of an educational diploma means jobs are limited to department store retail, packaging at a local factory, serving beer at a bar or sex work, Sudaporn said.

Beer-bar girls don’t need a diploma. Plus, the job allow a teen mom and her husband to take turn to take care of their baby – she during daytime and he at night after work.

According to a girl at Wai Sai centre, working at a beer bar is profitable, especially if the girl puts in the so-called “overtime” or “OT”, which involves selling sex to customers.

However, these jobs don’t provide social security, have no holidays and are sometimes dangerous. Women who work at a beer bar are at risk of domestic violence from their jealous husbands, said Sudaporn.

According to Sudaporn, only half of the teen moms at the centre are still coupled with the baby’s father. The rest have found a new husband or are rearing their child as single mothers.

Without financial stability, a strong family bond, education and a secure job, the quality of their lives and that of their children remains worrisome.