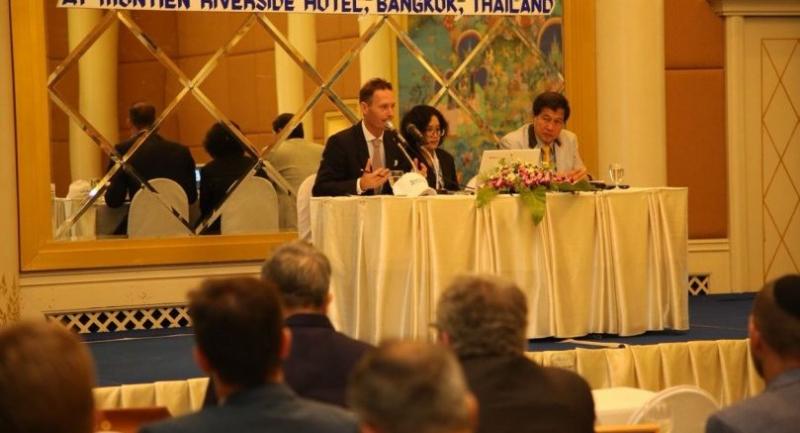 THE GOVERNMENT expects the controversy over cannabis-related patents to end within two weeks, with discussions for a solution focusing on national interests and the benefits to Thai people.

“We are going to establish a committee on Thai and international laws related to marijuana soon. This committee will talk with the Intellectual Property Department [IPD] to find solutions to patent issues,” Deputy PM and Justice Minister ACM Prajin Juntong said yesterday. Civic organisations have lately cried foul after discovering that all cannabis-related applications filed for patents with the IPD came from foreigners.

Highland, a civic organisation pushing for the legalisation of medical marijuana in Thailand, yesterday asked why the IPD had accepted those applications when the plant remained illegal.

The legalisation of marijuana aside, Thai law in fact forbids patent registration of “naturally occurring micro-organisms and their components, animals, plants, or extracts from animals or plants”, it added.

According to Highland, cannabis-related patent applications in the IPD system involved natural compounds of cannabis. And despite the Government Pharmaceutical Organisation (GPO) urging the IPD to revoke illegal patent requests in May, these applications have not yet been thrown out.

‘Reject at the first step’

“The IPD has a duty to reject the applications at the first step since they are against the law. But those [patent] requests have continued to exist in the IPD’s system,” Highland’s core members Chokwan Kitty Chopaka and Arun Avery said.

Claims by the IPD that it could not reject the applications because of the agreement on international property rights (TRIPS) were dismissed by BIOTHAI Foundation director Witoon Lianchamroon and FTA Watch. “The TRIPS agreement cannot override Thai law. Besides, that agreement has nothing to say about marijuana,” Witoon said.

Doubts are now emerging over whether the authorities’ push for legalisation of medical marijuana is intended to grant monopolies to those who have already prepared for legalisation. Thais have not had an opportunity to seek patents over marijuana because cannabis continues to be classified as an illegal drug.

Speaking at a seminar on medical marijuana laws in Australia, Canada and the Netherlands, Prajin yesterday said joint ventures could be considered if there were restrictions over medical formulas.

“We will make sure that foreigners are not the sole beneficiaries,” he said. Prajin added that there were plans to let farmers in community enterprises grow cannabis.

“Cannabis exports will create opportunities for Thai farmers. But such farming will be allowed when we have put efficient control measures in place. We need to prevent cannabis from leaking to unauthorised persons,” he said.

The draft bill to allow marijuana use for medical and research purposes is now in the hands of the National Legislative Assembly.

At the same seminar with Prajin, Adam Benjamin from Medifarm Australia said cannabis extracts were useful to patients suffering from cancer, seizures, Parkinson’s and other diseases and conditions.

“Thailand should make use of the opportunities marijuana offers. We are ready to support Thailand’s research on medical marijuana. We won’t charge the Thai government for the support we will provide,” he said.