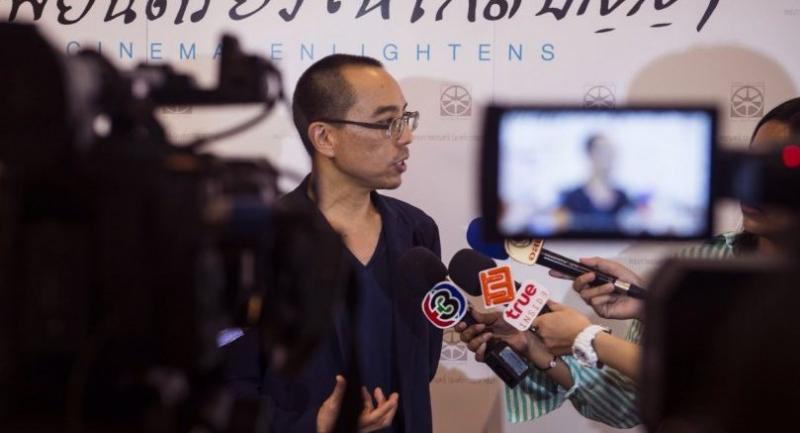 This picture taken on November 19 shows Thai director Apichatpong Weerasethakul speaking to journalists after receiving an award at the Thai Film Archive in Nakhon Pathom, outside Bangkok. //AFP

Nakhon Pathom - Wearied by the creative constrictions of junta-run Thailand, Palme d'Or-winning director Apichatpong Weerasethakul is making his next feature in Colombia with Tilda Swinton, but promises to bring his key themes -- ghosts, memory and politics -- with him.

Apichatpong, a soft-spoken 48-year-old from rural Thailand, may not leap out as a household name.

But he is the figurehead of Thailand's cinema scene and a doyen of the global arthouse circuit, vaunted for his non-linear storytelling, dreamy shooting style and strong -- if often subtle -- political messaging.

With his home country under military rule since 2014, the filmmaker told AFP he decided not to make the film in Thailand, where political discussion is stifled and he says films can be shut down on the whim of the generals.

To make a movie without addressing the urgent issue of the kingdom's politics would be to undermine his role as a filmmaker, Apichatpong says.

"I want to talk about politics, our reality, our lives," he told AFP this week before an awards event on November 19 in Nakhon Pathom, outside Bangkok.

Military rule has suffocated artistic expression in Thailand, but with elections slated for early next year a creative kickback is emerging, from documentaries to rap and graffiti.

Yet for film the road ahead is long, Apichatpong said, explaining that "cinema will follow... real democracy and rights" and adding he is happy to "nurture a new generation of filmmakers".

Apichatpong was catapulted to recognition by "Uncle Boonmee who can recall his past lives", which won the 2010 Palme d'Or at Cannes.

In December he is due to release a short in the kingdom as part of "Ten Years Thailand", a bold project to document his nation's political and social travails.

But his next feature, "Memoria", which is currently being scripted, will be filmed in Colombia -- a country that shares some parallels to his politically fragmented homeland.

Set between 1970 and 1980, a period marked by the bitter fight between the left-wing Farc guerillas and radical paramilitary groups of the right, the film features Swinton playing an expat "adventurer" of sorts.

She experiences auditory hallucinations and tries to "find the sources of these sounds happening to her only", the Thai director explained.

Research took in two months-long trips to Colombia and interviews with psychiatrists about drug use, he said, typical of his immersive approach to filmmaking.

Apichatpong had for years quietly been working on a script for his long-time friend Swinton.

The pair eventually agreed to frame the story outside Thailand, where they were "both strangers... both foreigners".

"The story is about discovery. She (Swinton) is very adventurous. She has different lives in the cinema world, she has more mainstream movies... but also experimental movies."

French actress Jeanne Balibar, who met the Thai director when they were jury members at Cannes in 2008, will also star in the film as an archeologist.

The story draws on a motif that runs through all his films -- ghosts.

Apichatpong's parents were doctors and he grew up in a hospital compound where "sickness, death and birth" left an indelible mark, while he was also preoccupied with sci-fi and the supernatural throughout childhood.

"There was nothing at that time except those magazines of sci-fi, ghost comics and ghost movies," he said.

"So to me they belong to the same place, a place out of the ordinary, antigravity, something that can appear at night and disappear in front of your eyes."

But there was logic in the leap to Colombia -- firstly from a financing perspective for an international film, but also to satisfy his curiosity.

"They also really believe in ghosts."