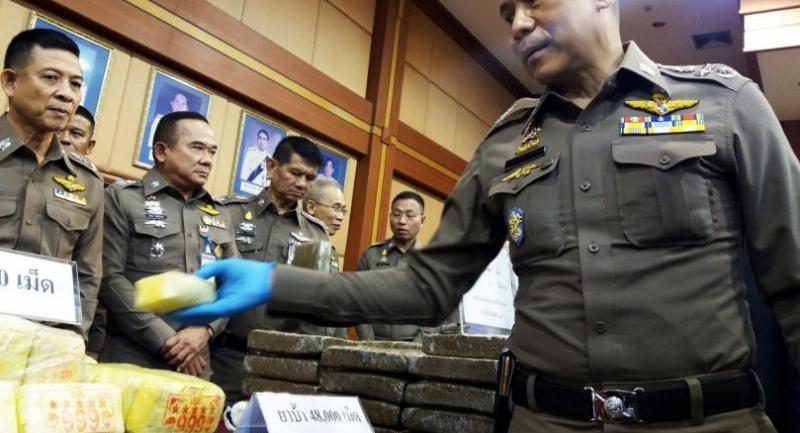 Taiwanese chemists are a driving force behind the glut of meth flooding the Mekong region after they tweaked the recipe to dodge controls on other precursor chemicals, Thai drug cops said Friday.

Record hauls of both the low-grade "yaba" methamphetamine tablets and the more potent and expensive crystal meth version -- or ice -- have been made this year by Thai police.

Experts say the "Golden Triangle" drug lords, mainly in neighbouring Myanmar's self-administered Wa state, have been pumping out more drugs than ever.

It is trade worth tens of billions of dollars annually, with made-in-Myanmar meth reaching lucrative markets as far as Australia and Japan.

That oversupply is in part due to new and cheaper precursors, one of Thailand's most senior drug police said Friday, attributing the change to the expertise of Taiwanese meth cooks working for the drug syndicates.

"They are now using sodium cyanide... a substance used in every factory in Thailand that is not controlled," said Major-General Watchara Thipmongkol, commander of northern Thailand's drug force -- which includes the kingdom's portion of the Golden Triangle.

Thailand controls the best meth-making substances -- including P2P and cold medicines ephedrine and pseudoephedrine -- meaning buyers and sellers across the chain are traced and checked.

But the abundance of the cheaper sodium cyanide has navigated the ban, pushing the price of "yaba" pills -- a caffeine-cut stimulant known as "crazy medicine" -- down to around $3 (100 baht) in Thailand.

"With cheaper chemicals they can produce 100 million pills and even if only 20 million pills make it through police checkpoints... it's worth it," he added.

Taiwanese chemists have long featured in Asia's meth trade, either as "contract cooks" or running their own laboratories.

Their involvement in the Mekong is "frankly not surprising given the skillsets needed to run meth labs and their history and expertise doing it in other parts of Southeast Asia," said Jeremy Douglas, regional representative of the UN Office on Drugs and Crime.

Drug networks are also finding new ways to out-fox police, hiding meth in truckloads of fruit in Thailand, or taking advantage of porous borders and underfunded law enforcement in neighbouring Laos to run the drugs south.

Drug money riddles the region -- yet few major players are taken down in the near daily busts.

Thai police said a local official, Aka Janoo, was arrested with 250,000 pills this week in Chiang Rai, the gateway to Myanmar's drug producing Wa and Shan states.

Yet major seizures of precursor chemicals are rarer.

Myanmar acknowledges a "significant" drug production problem, but says its neighbours must help prevent the inflow of precursor chemicals to make them.