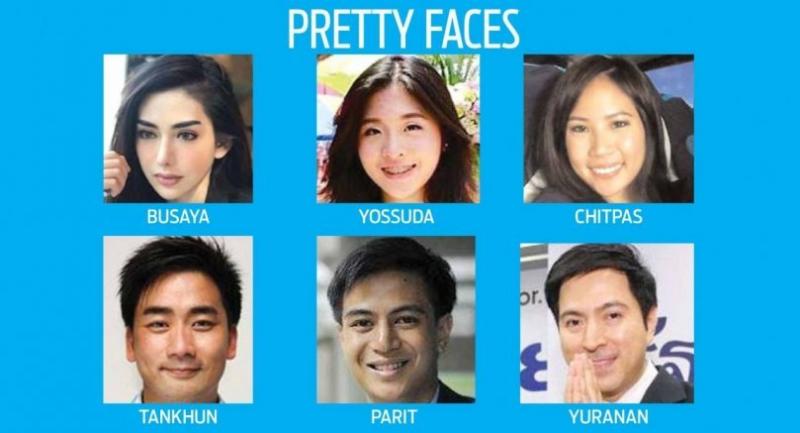 THE INTERNET began exploding with comments after Khunying Sudarat Keyuraphan showed up with her “cute” 19-year-old daughter Yossuda “Ginnie” Leelapanyalert to visit voters two weeks ago.

Many enthusiasts even came up with fictitious party names, such as Pheu Ther Party or “Party for You” and Phak Mae Yai or “Mother-in-law’s Party”.

In fact, many Facebook users also shifted their focus from the anti-junta Future Forward Party, joking they would much rather support young Ginnie’s mother Sudarat.

Many posts have mushroomed on the Internet displaying Ginnie’s photographs, while a Facebook page called “Let me know about cute politicians” has emerged, listing pictures of good-looking politicians and their equally attractive heirs and heiresses.

New Pheu Thai MP candidate Busaya Tungpakorn’s debut this month has also caught public attention, not so much for her political presence, but more for her extraordinary good looks. She is running in Nakhon Sawan province in place of her father Banyin, who is serving a political ban.

This trend is not actually new.

Former PM and Democrat leader Abhisit Vejjajiva and his nephew Parit Wacharasindhu, for instance, were widely applauded for their charm and attractiveness, and now, many celebrities have jumped on the political bandwagon, hoping their looks will take them places.

However, can beauty really offer a path to a seat in Parliament or success in politics?

The answer to this is both yes and no.

A couple of “hot” politicians in the West come to mind, such as Canadian PM Justin Trudeau and French President Emmanuel Macron. But looks can be deceptive.

Janjira Sombatpoonsiri, a political scientist from Thammasat University, said their success may have very little to do with their good looks.

“In the West, their image is not that big a deal,” she said. “Trudeau stands out because his policies are relatively progressive when compared to his neighbour, US President Donald Trump.”

However, in places such as Latin America or Southeast Asia, including Thailand, a different social context comes into play, she explained.

Don’t judge a book by its cover

In these areas, more celebrities can be seen transcending from the field of entertainment to politics, Janjira said. For instance, the Philippines’ 13th president Joseph Estrada was an actor.

As for the recent trend of good-looking politicians in Thailand, Janjira explained this craze, an effect of the “Net Idol cult”, was more prevalent online.

Of course, good looks do grab people’s attention, but it is a completely different story when it comes to actually attracting votes, she said.

She explained that there are two major points that count in Thai politics even more than looks.

“One is the patron-client system. For instance, do you know people in the community? Have you helped them?” she said, referring to politicians’ practice of supporting voters by paying for funeral rites or other occasions.

“And the second point is policies,” she added.

Some might argue that the upcoming elections will see at least 7 million voters between the ages of 18 and 25, who will vote for the first time.

These young voters might find looks more appealing and may decide to choose the best-looking politician.

However, the academic said this matter was uncertain.

Firstly, there is no certainty that all of them will show up to cast their ballot, and even if they do, will they really base their decision on the looks of the candidate?

She also advised voters to be rational when casting their ballots, because their choices would have an impact on society in the long run.

“We don’t choose our life partner based on how they look alone. So, why should we choose a politician based on their good looks?” she asked.

Meanwhile, former actor Tankhun Jitissara, who is with the Democrat Party, said good-looking people face a lot of challenges in politics.

“People have very high expectations of good-looking people, which can be very hard to match,” he said.

“When people see a beautiful or a handsome politician, they consider us like the lead characters in a Thai soap opera. They expect us to be perfect.”

Good-looking people also get branded as being snobbish or “brainless beauties”, he said.

So, when they step into the political sphere, they have to prove that they have more to offer than just being eye candy.

“You have to prove your worth.

“Show them you can solve issues ranging from poverty to community waste disposal. Your looks can draw some attention, but at the end of the day, voters will judge you more by your performance.”