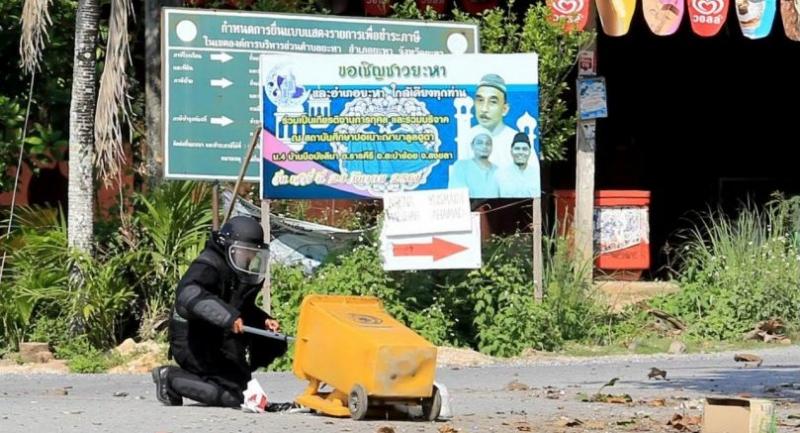 SUSPECTS BELIEVED TO BE LINKED TO KILLING OF THREE ON SUNDAY, TEAM OF RANGERS ALSO ATTACKED IN YALA

Security authorities had set up the checkpoint in tambon Tha Muang’s Ban Tung Don after learning that the suspects behind the killing of two defence volunteers and an assistant village head on Sunday might be hiding there.

Yesterday’s incident took place after two men on a motorcycle refused to stop at the checkpoint, prompting security volunteers to pull out their guns to try and stop the speeding vehicle. However, the suspects fired at the volunteers, injuring Kosin Kaewmanee and Manit Dumdee.

Kosit was shot in his arm, while a bullet scraped Manit’s head. Both are in safe condition and receiving treatment at Thepha Hospital.

Initial investigation shows that the incident is very likely linked to the fatal attack on Sunday, in which Abdulloh Yiman, assistant village head of Ban Huay Pling, along with volunteers Krissada Ti-iadyor and Charan Chanthamunee were killed. They were monitoring the Tha Yi market in Ban Huay Pling, tambon Tha Muang.

Police said the victims were attacked by four suspected insurgents who had arrived on two motorcycles. The two pillion riders were disguised as women, with their heads covered with a hijab, to make it appear as if they were couples shopping in the market. This is why the officials were caught off-guard when they suddenly opened fire.

Police found 20 spent shells from an M16 rifle and a 9mm pistol at the site of Sunday’s shooting. Officials also say that the suspects took two assault M16 rifles and a pistol from the victims and fled.

Songkhla is a part of Thailand’s violence-plagued deep South, where unrest has raged for over a decade, claiming thousands of lives.

The Internal Security Operations Command Region 4 Forward Command, which oversees the deep South, hopes to send troops in the deep South back to their barracks from 2020 onwards and hand the security mission over to volunteers.

Local volunteers have proved to be efficient at curbing violence recently, though their efficiency has also turned them into key targets.

The chief of the team, PFC Saksakon Phosri, said he and five other rangers had stopped by the school to check on security volunteers there when six gunmen suddenly showed up and opened fire.

“They must have fired over 30 bullets, but we fired back until they retreated,” Saksakon said. Nobody was injured in the incident.

A source said the attackers are believed to be working for a group led by Sukiffi and Abdullah, whose surnames are unknown.

Attacks this year at markets in deep South

August 30: One security volunteer is shot dead at a market in Pattani’s Muang district, while stray bullets injure two women;

November 2: One ranger is killed and another seriously injured in a shooting at a market in Pattani’s Yaring district (several shoppers faint from shock);

November 22: Two security volunteers are shot dead at a weekend market in Pattani’s Kapho district; and