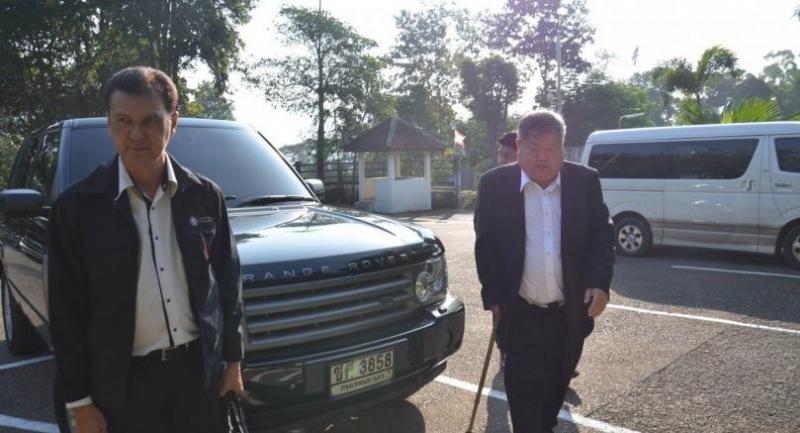 Srivara was the first witness to testify before the Thong Pha Phum Provincial Court yesterday.

He declined to reveal details of his testimony, as that would be a contempt of court, but said public prosecutors had performed their duties fully and would be able to prosecute the defendants.

He said people “should follow the developments in the case” in the coming weeks.

The second witness to take the stand in the afternoon was the chief of the Thung Yai Naresuan Wildlife Sanctuary, Wichien Chinnawong, who had led officials in making the high-profile arrest of Italian-Thai Development president Premchai.

Wichien disclosed that the interrogation of witnesses in the court went smoothly and he had given the judge full details of the arrest.

“I just recalled the details of what really happened on the day we found Premchai and his companions at the campsite inside the wildlife sanctuary alongside the wild animal carcasses, the procedure of the arrest, and other important details that will be useful for the court,” Wichien said.

He said he had also provided key evidence to the court, but he could not reveal it to the public at this stage as the case was still being heard.

“Today, Deputy Police chief Pol General Srivara and I presented ourselves to the court as the first two witnesses for the plaintiffs. We still have 14 other witnesses on our side, who will be testifying to the court,” he said. Wichien revealed that the first defendant in the case, Premchai, was also present at Thong Pha Phum Provincial Court yesterday, while the atmosphere in the court room was calm and quiet.

Premchai and three other persons – Yong Dodkrua, Thanee Thummat and Nathee Riamsaen – were arrested in early February at the campsite within the sanctuary in Kanchanaburi province for allegedly entering the area without permission, allegedly possessing guns and ammunition, and for allegedly poaching a number of wild animals, including a black leopard, a Kalij pheasant, and a barking deer.

They were initially charged with nine offences, but three charges were later dropped by police.

The Thong Pha Phum Provincial Court has scheduled 10 sessions for the hearing of evidence, with 32 witness testimonies from the prosecutors’ side from yesterday until Friday, from December 6-7, December 11-13 and on December 18.

These will be followed by 17 witness testimonies from the defendants’ side, who are scheduled to take the stand over six sessions from December 19-21 and from December 25-27.

The four defendants also face a civil lawsuit filed by the National Parks, Wildlife and Plant Conservation Department, which is demanding that they pay Bt12.75 million in damages to the sanctuary. The defendants were told to submit their written testimonies in the civil case by December 11.