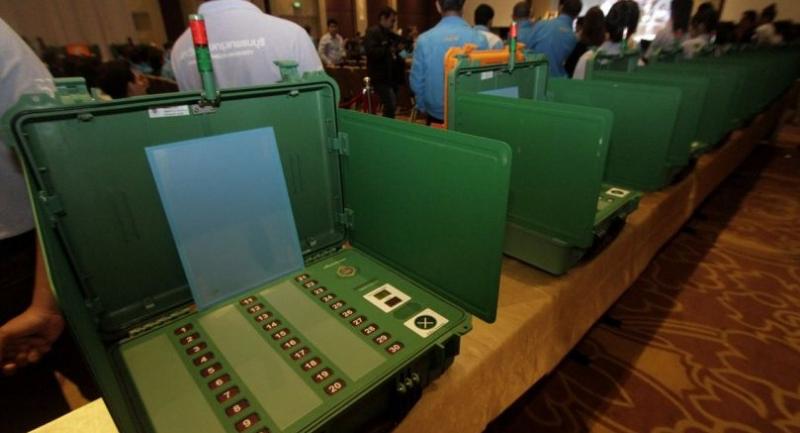 Voting booths of the Democrat during the party caucus at the Miracle Grand Hotel.

DISTRUST AMONG candidates led the Democrat Party to opt for blockchain technology last month when it was choosing its new leader. It was the first time digital technology had been utilised in Thai politics.

More than 120,000 votes were cast using the Thai-developed Zcoin blockchain during the November 1-9 vote.

Zcoin is an open-source, decentralised private cryptocurrency system featuring anonymity for its users with data stored on the blockchain.

Poramin Insom, founder and lead developer of Zcoin, helped Democrats tap the potential of this new technology, which also offers greater transparency and other benefits.

According to Poramin, candidates for the party’s leadership and its internal election commission were concerned about how to store the voting data securely, fearing there could be fraud and unfairness in the election.

Storage of data on blockchain prevents unauthorised changes, since any alteration requires a consensus among majority stakeholders.

Though Zcoin blockchain ensures voters’ anonymity, the party chose an option that allowed results to be cross-checked, Poramin told The Nation Weekend.

It was Thailand’s first large-scale electronic voting with two sets of data involved: identification documents and vote tallies, he explained.

The data were encrypted and stored on an IPFS (InterPlanetary File System), a decentralised and distributed file-storage system.

The IPFS hashes were then stored on the Zcoin blockchain, which acted as a decentralised immutable database that could be audited by the party’s election commission and its three leadership candidates.

The voting data could only be decrypted if all five groups involved – three representatives of each candidate, the election commission and the Democrat Party itself – were present and in agreement. It was a tight race for the two top candidates, former premier Abhisit Vejjajiva and his challenger Warong Dechgitvigrom, with Abhisit winning 67,505 votes and Warong close behind with 57,689 votes.

“The unique circumstances of this election made Zcoin’s blockchain a good fit to record votes and sets the stage for future deployment of e-voting systems in the country,” Poramin said.

However, he said, preparations for the use of blockchain should have been made much earlier in order to ensure a smoother process. After all, technical errors would have prompted sceptics to suspect cheating and would have given the new technology a bad name.

In his view, Thailand has the potential to utilise this technology in a national election and it would be possible to do so in the next few years with growing demand from voters and candidates.

He said election organisers could develop electronic-voting machines and use blockchain to store the data.

“I believe we’ve achieved a huge milestone in our country’s political history and hope other political parties or even governments, not just in Thailand but elsewhere in the region, can look to using blockchain technology in enabling large scale e-voting,” Poramin said.

Meanwhile, new political players such as the Moderate Party and Future Forward Party are also keen to use new technology.

“So most of the time, we are working online. We discuss and hold meetings on the Internet,” Chumphon said. “Everyone can basically work from home. And this saves us so much time and money because we don’t need a bricks-and-mortar office.”

The party stores membership data and other documents mainly in soft files, he said. Although sometimes some of the data have to be collected traditionally in paper form, they are recorded digitally afterwards, he explained.

Though the Moderate Party has yet to obtain legal standing, Chumphon said that once it is officially registered, it will launch a website and make it a hub for administrative work and communication.

The Future Forward Party relies extensively on cloud computing in its operations.

Party registrar Klaikong Vaidhyakarn said administrative affairs, internal communication and emails, as well as the donation system, are all connected through its official website, futureforwardparty.org. Party members work and coordinate via the website, and even the decision-making process within the party is done online.

About 40 per cent of the members also use this system to vote for branch leaders and executives, Klaikong said.

The system is trustworthy, with a verification protocol that matches the standards of online banking applications.

Like the Moderate Party, Klaikong said his party allowed members and staff to work online.

This allowed better participation as well as flexibility since they don’t have to be at the office and could work anywhere, he added.