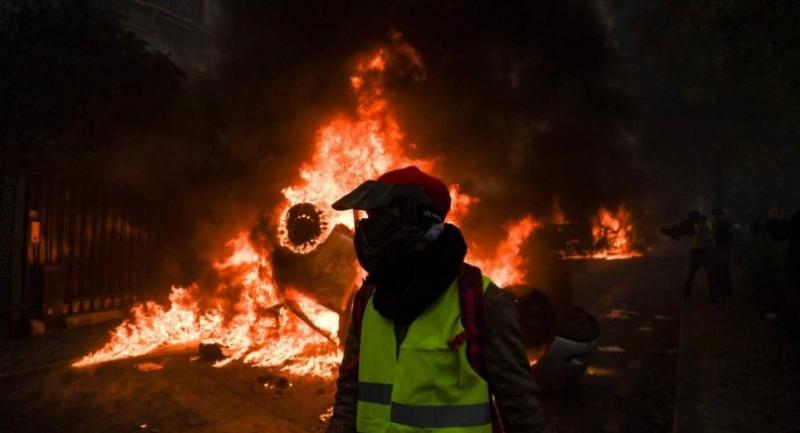 A demonstrator walks past a burning car during a protest of Yellow vests (Gilets jaunes) against rising oil prices and living costs, near the Champs Elysees in Paris, on December 1, 2018./AFP

Groups of masked protesters battled police through clouds of tear gas near Paris' Champs Elysees Saturday as thousands took part in a third weekend of "yellow vest" demonstrations, which have morphed from anger over fuel taxes into a broader anti-government movement.

The violence broke out early after crowds began gathering at the Arc de Triomphe, where they found the Champs Elysees on lockdown by police manning barricades and water cannons.

While several dozen protesters were allowed to pass after an ID check and search, many others, often wearing gas masks or ski goggles, remained behind and fought with police, who responded with rounds of tear gas.

Demonstrators, some wielding slingshots, threw rocks, construction barricades and even paint at police in protective gear and helmets, with some officers seen spattered with yellow liquid.

Prime Minister Edouard Philippe, visiting the Paris police's command centre, said at least 107 people were arrested in Paris among the estimated 5,500 protesters. Some 8,000 were counted in the city last Saturday.

An acrid odour of tear gas and smoke from burning cars and trash containers filled the air in the areas near the clashes.

Stores and restaurants along the famous avenue as well as surrounding streets had boarded up windows, anticipating a repeat of the clashes last Saturday which President Emmanuel Macron compared to "war scenes".

Chantal, a 61-year-old pensioner who came from an eastern Paris suburb, said she was avoiding the "hooligans" but was determined to send President Emmanuel Macron a message on the rising costs of living.

"He has to come down off his pedestal," she said under cold rain on the Champs Elysees. "Every month I have to dip into my savings."

Although police managed to clear the square around the Arc de Triomphe toward midday, cat-and-mouse skirmishes continued as protesters spread out to nearby streets and neighbourhoods.

'Taking us for idiots'

Across the country some 36,000 people took part in mainly peaceful protests against a surge in fuel prices this year, which they attribute to a series of tax increases to finance the government's anti-pollution efforts.

The "yellow vest" movement erupted on social media in October and has since become a wider protest against Macron, who is accused of failing to recognise the rising costs of living that has left many struggling.

"With all these tax hikes, there's not much left for eating at the end of the month," said Philippe, a high school cook in the Essonne region outside Paris.

Overall participation Saturday was down sharply from the first day of protests on November 17, which attracted around 282,000 people, while 106,000 turned out last Saturday.

'We want our dignity'

The countrywide protests have included many pensioners and have been most active in small urban and rural areas where demonstrators blocked roads, closed motorway toll booths, and even walled up the entrance to tax offices.

Two people have died and hundreds have been injured in the protests which opinion polls suggest still attract the support of two out of three French people.

Attempts by the government to negotiate with the grassroots movement have failed, in large part because representatives have insisted on public talks broadcast on TV.

"We want our dignity back and we want to be able to live from our work, which is absolutely not the case today," Jason Herbert said after walking out of talks with Prime Minister Edouard Philippe on Friday.

Macron has sought to douse the anger by promising three months of nationwide talks on how best to transform France into a low-carbon economy without penalising the poor.

He also vowed to slow the rate of increase in fuel taxes if international oil prices rise too rapidly but only after a tax hike due in January.

But many protesters were unconvinced by Macron's speech on Tuesday.

"What we need is something tangible, not just smoke and mirrors," said Yoann Allard, a 30-year-old farmhand.

Trade union leaders, who met Friday with Philippe, have called for a moratorium on a new fuel tax hike set for January, a suggestion which some pro-Macron members of parliament have started to endorse.