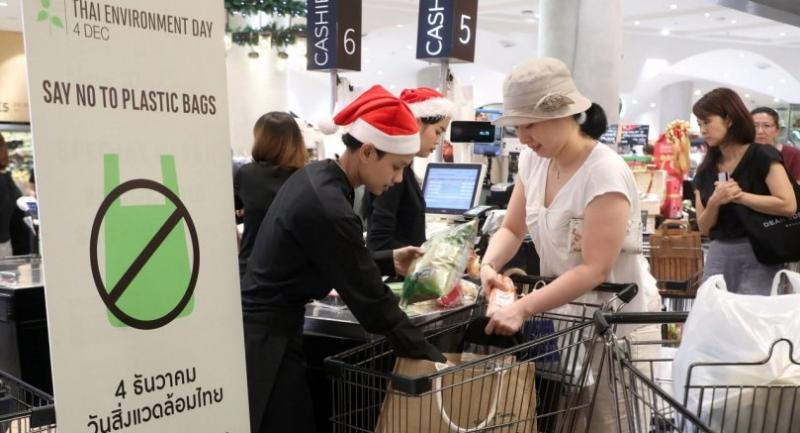 Shopping malls and convenience stores yesterday encourage their customers to use cloth bags rather than plastic, in a move to cut the more than 2 million tonnes of plastic waste generated in Thailand annually. IT IS important for people to make small changes in their daily lives in order to cut down on the huge amount of plastic waste being generated, according to experts involved in fighting the menace.

Thailand faces serious problems caused by plastic pollution. The country produces more than 2 million tonnes of plastic waste per year and ranks sixth among countries with the largest amount of mismanaged plastic waste. Public officials from the public sector and academics pointed out on Thai Environment Day yesterday that the problem of plastic pollution can be solved through behaviour adjustment and active participation by everyone, along with the proper policy support from the authorities.

Natural Resources and Environment Minister General Surasak Karnjanarat said plastic waste pollution is one of the biggest problems facing Thailand. Thai people throw away some 45 billion single-use plastic bags per year, which amounts to about 12 per cent of overall household waste nationwide.

Surasak said the government was focused on seriously addressing the problem. The Public Health Ministry have stopped distributing plastic bags in every public hospital since October, while the National Park, Wildlife and Plant Conservation Department is also planning to ban plastic bags in all 154 national parks across the country. He said many supermarkets and department stores across Thailand have also joined the government campaign to voluntarily refrain from distributing plastic bags on the national Environment Day.

However, despite their promises, most shops were found to be still providing their customers with plastic bags.

Jiaranai Vithidkul, a PhD student at Chulalongkorn University, said she has been avoiding plastic bags for a long time and this environmentally friendly behaviour was not as difficult as many people thought it to be.

“People usually think that giving up the use of plastic bags and adopting a low-waste lifestyle is too radical. But from my experience, I can say that there are many easy ways that urbanites like us can avoid producing unnecessary waste,” Jiaranai said.

“For example, I usually take an extra fabric bag with me all the time to carry shopping items instead of asking for a plastic bag, and when I have lunch at the university canteen, I always use stainless steel spoons and forks to eat noodles instead of single-use chopsticks.”

She said these little adjustments that she made in her daily life were very easy and if many people did the same, the outcome would be really big, as the production of a large amount of waste can be avoided. However, she admitted that the hardest part of changing habits for a greener lifestyle was the addiction to the convenience of plastic.

“I admit that plastic makes our lives much easier and provides convenience. As we have got used to this convenience for quite a long time, it has made us feel that we cannot do without plastic, even |though before the invention of plastic we could live perfectly well without it,” Jiaranai said.

As many people still think that it is very hard and inconvenient to change their habits, she suggests that the best way to reduce plastic waste in daily life is to start with small things and go step by step.

“To stop using plastic bags at once is an unsustainable way of changing one’s habit. Everyone should find their own way to lower waste generation in their daily lives, so it suits their lifestyle,” she said.

“If you find the most suitable way for you, it will be very easy to practice and make it your new habit.” Pracha pointed out that governmental support for biodegradable plastic and alternative material for goods packaging are also important to make their cost cheaper and promote them as a replacement for plastic with environmentally less-harmful materials.