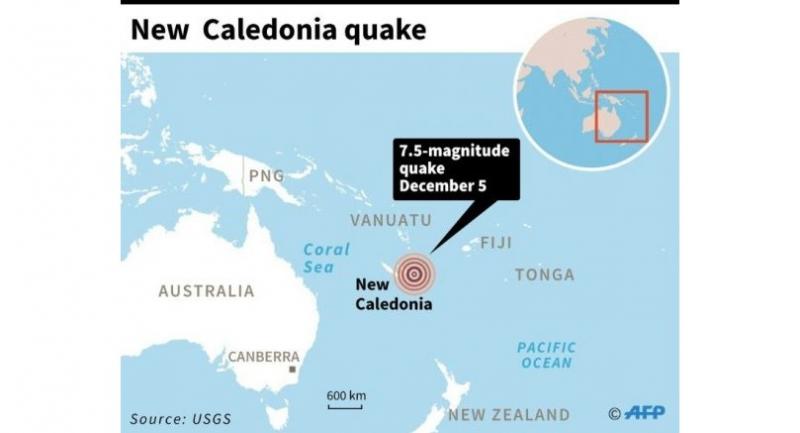 Noumea - A powerful new earthquake hit off New Caledonia Wednesday just hours after a strong tremor hit the Pacific region, but there was no new tsunami alert, authorities said.

The quake struck at 5:43pm local time (0643 GMT) at a depth of 10 kilometres (6.2 miles) some 192 kilometres east-southeast of Tadine in New Caledonia, an overseas French territory north of New Zealand.

The US Geological Survey revised it to magnitude 6.6 from an initial measurement of 7.0.

There were no immediate reports of damage from the earlier earthquake, but the Pacific Tsunami Warning Centre said that waves had been "observed" and could reach up to three metres in height.

Residents of New Caledonia, which lies north of New Zealand, received an urgent text message directing them to go to refuges immediately.

"We activated the alert sirens... along the east coast and all the Loyalty Islands," Eric Backes, director of the islands' civil defence authority, told local radio.

"People should move away from the coastline and to higher ground or go to the evacuation points set up in each commune."

Basile Citre, a municipal official on the Loyalty Island of Mare, said the situation there was so far under control.

"I was in a meeting at the town hall and we felt a small tremor then a bigger one," he told AFP.

"The building shook, but there was no damage. When the sirens sounded, the population headed for higher ground for safety. For now, nothing serious has happened."

Geoscience Australia seismologists monitoring the event said a tide gauge on Mare Island, the second-largest of the Loyalty Islands, had registered a signal for a 43 centimetre wave height.

"Based on that, we can say that this earthquake has generated a tsunami, but we don't know the impact and how far it could go onshore," seismologist Spiro Spiliopoulos told AFP.

Tsunami sirens were not immediately activated in Vanuatu -- or in Fiji where they tested the tsunami warning system earlier this week and some coastal communities could be brushed by tsunami waves.

A spokesman for the Vanuatu geohazards observatory said the sparsely populated island of Tanna was expected to be most affected but no evacuations had been ordered.

"There are no sirens on Tanna but the people on the island are familiar with these situations and they will have taken precautions and gone to higher ground," he told AFP.

The epicentre of the quake was some 300 kilometres east of the New Caledonia capital Noumea, but such was the force of the shock that experts said small tsunami waves may be observed as far away as Antarctica and Russia.

"Hazardous tsunami waves are forecast for some coasts," the Pacific Tsunami Warning Center said, after earlier warning that the danger zone included "coasts located within 1000 kilometres of the earthquake epicentre."

There were no immediate reports of deaths related to the initial earthquake and according to the US Geological Survey modelling, damage from the quake is expected to be minimal in terms of loss of life.

As multiple aftershocks of up to 5.9 were felt, CCTV footage showed bathers still frolicking in crystalline sea off Noumea, seemingly unaware of the seriousness of the threat on the other coast, just 50 kilometres away.

New Caledonia, with a population of 269,000 people, is a French Pacific territory.

Its citizens last month rejected independence in a referendum, though the vote revealed lower-then-expected support for remaining part of France.

The island is home to a quarter of the world's known supplies of nickel -- a vital electronics component -- and is a foothold for France in the Pacific, with French troops stationed on the island.