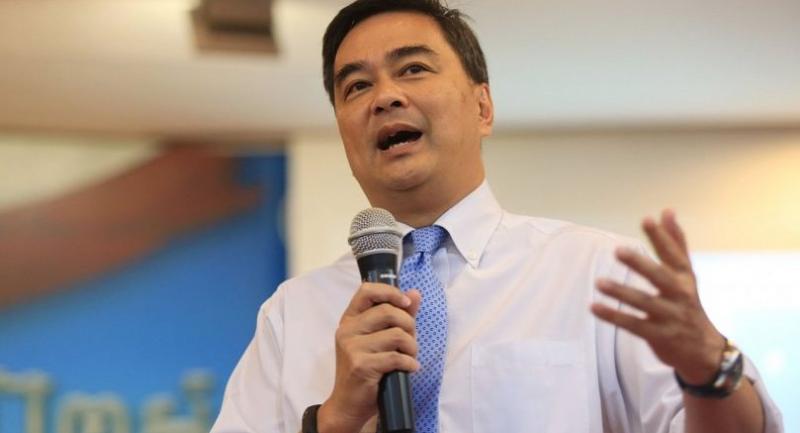 THE NUMBER OF parties boycotting tomorrow’s meeting with the junta grew yesterday with Democrat leader Abhisit Vejjajiva announcing that his party also will not be attending.

The Democrats are the latest major political party to shun the meeting called by the ruling National Council for Peace and Order (NCPO).

Earlier, Pheu Thai, Thai Raksa Chart and Future Forward parties had announced that they would not attend any meeting called by the NCPO, stating that the ruling |junta had nothing to do with the elections. They have insisted |that the upcoming election only concerns the Election Commission (EC) and political parties.

Abhisit said yesterday that he “saw no benefit” in attending the meeting, as the NCPO invitation said the event was being held for political parties to hear from the authorities about the next election.

“The invitation said the meeting was for relevant authorities to explain details about the election, not for participants to discuss how the election will be held. So, I’m not sure if there will be any exchange of views,” Abhisit said.

“The crux of this election is to allow public participation under a democratic system that sets the country’s future. Also, for this election to be acceptable it needs to be free and fair.”

Abhisit also said the Democrats would not join forces with the pro-junta Palang Pracharat Party to back General Prayut Chan-o-cha’s return as prime minister.

He added that many of Palang Pracharat’s policy platforms were “incompatible” with those of his party. For instance, Palang Pracharat focuses on centralisation of power, while the Democrats want power to be decentralised from Bangkok to the provinces.

Khunying Sudarat Keyuraphan, who is expected to be Pheu Thai’s chief prime ministerial candidate, maintained yesterday that the party would not attend tomorrow’s meeting if the NCPO and government representatives were present.

“Holding an election is the EC’s duty. We don’t think the government and the NCPO should get involved,” she said. “I am against the NCPO or the government interfering” through use of absolute power allowed by Article 44 of the post-coup interim charter, some elements of which have been added to the current Constitution.

General Prayut, in his capacity as head of the NCPO, had earlier shrugged off growing opposition to the meeting, which was previously expected to serve as a forum for political parties to voice their requests related to the next election. The national ballot has been tentatively scheduled for February 24.

Prayut, who is expected to preside over the meeting, had implied that the boycotting parties did not want to contest the election.

Through an order issued by Prayut in December last year, the junta has been empowered to “work with” the EC and political parties in setting the election date.

Separately, Pheu Thai yesterday blamed the “serious conflicts” between its election candidates on the EC’s recent mapping of constituencies.

Sudarat, who leads Pheu Thai’s election strategy committee, said there were conflicts involving its candidates in more than 10 constituencies, though she dismissed media reports that fistfights had broken out among some party members.

“There was no violence. The persons involved only showed their hurt feelings. The mapping of the constituencies is to blame for the conflict. This problem needs to be tackled urgently,” she said.

Pheu Thai secretary-general Phumtham Wechayachai said yesterday that a misunderstanding had caused the conflict and that the arguments between the politicians could not be considered serious.

“The incident was inaccurately reported and was over without any violence,” he said.