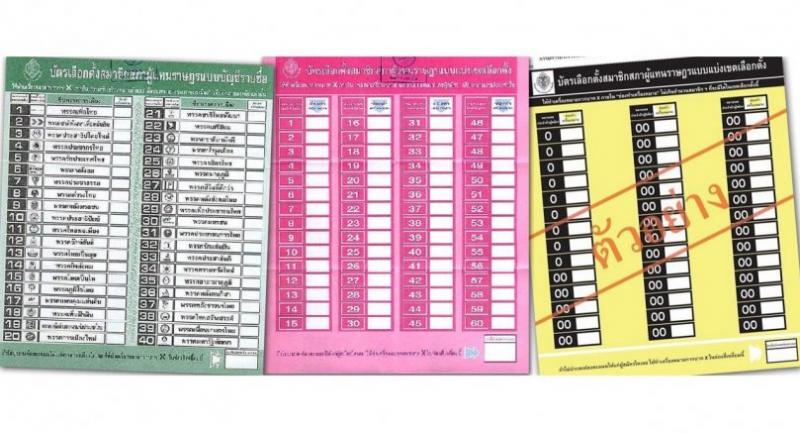 THE DEMOCRAT PARTY is looking at legal means to deter the junta leader’s proposal to remove political parties’ symbols and names from ballots, fearing it will cause confusion among voters.

This unprecedented proposal by Prime Minister Prayut Chan-o-cha was met with objections from politicians and critics, who believe the absence of symbols and names will only benefit the pro-junta Phalang Pracharat Party, as many well-known politicians are running under its banner.

Democrats held a discussion yesterday and said the party’s legal department would check the issue and work on trying to stop anything that could prevent free and fair elections.

Democrat Party spokesman Thana Chiravinij said yesterday that the removal of names and party symbols will not just give one party an advantage, but will also cause confusion among voters, especially among the senior citizens and the illiterate.

This confusion may even discourage these voters from turning up, he said, adding that it is the Election Commission (EC)’s job to ensure every citizen exercises his or her right to vote.

However, proponents of the proposal argue that it will be easier for the EC to only show candidate numbers on the ballot and leave out other details because candidates from the same party this time will not share the same number.

However, Thana called on the EC to put public interest ahead of its own convenience.

General Prayut’s proposal has also raised questions about whether the junta is meddling with the election.

Thana pointed out that Prayut should never have been part of the meeting between the ruling National Council for Peace and Order and party representatives on Friday and should have distanced himself from the election process altogether.

He said this was especially important, considering the fact that the prime minister has the absolute power to appoint or remove members of independent agencies like the EC.

Meanwhile, former election commissioner Somchai Srisuthiyakorn said on Facebook yesterday that this was an old trick to get voters to choose candidates whose names they were most familiar with, adding that voters may not realise that these candidates were now with Phalang Pracharat.

“The only party benefiting from this will be the one that has stolen former MPs from other parties,” Somchai wrote.

He added that removing logos and party names can lead to further complications, as this move may lead to a lawsuit or the election being voided, because having a ballot without party symbols and names violated the Constitution.

The former EC member also implied that if the election ends up being unsuccessful, then the current seven EC members may be held responsible for wasting the over Bt5-billion budget earmarked for the national poll.