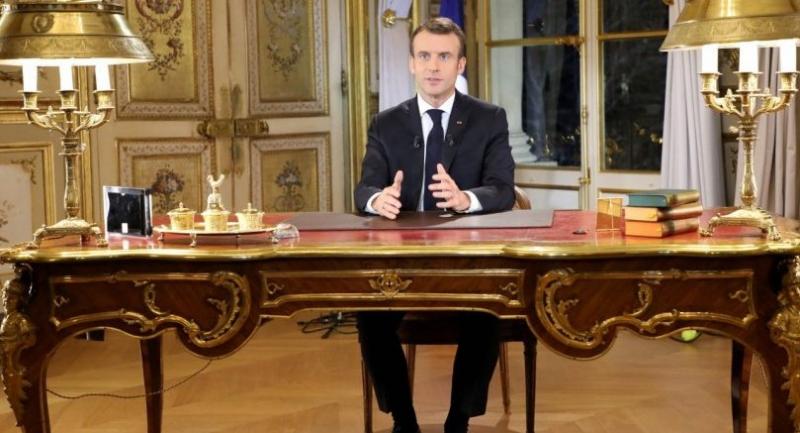 French President Emmanuel Macron speaks during a special address to the nation, his first public comments after four weeks of nationwide 'yellow vest' (gilet jaune) protests, on December 10, 2018, at the Elysee Palace, in Paris./AFP

Embattled French President Emmanuel Macron Monday announced a series of financial measures seeking to defuse the "yellow vest" revolt that has triggered violent protests in cities across the country.

In a 15-minute televised speech from the Elysee Palace, a sombre-looking president told the nation, "I accept my share of responsibility" for the crisis.

The former investment banker struck a more humble tone than usual as he sought to address criticism of his style of leadership.

"I know that I have hurt some of you with my statements," he said.

Macron stressed, however, that the protests by mostly low-income people in small town or rural France were the result of long-term problems.

"Their distress doesn't date from yesterday. We have ended up getting used to it," he said.

"These are forty years of malaise that have come to the surface."

Among the measures Macron announced was a 100 euro ($113 dollar) monthly increase in the minimum wage as of next year, for which businesses would not have to foot the bill.

Macron's government had previously suggested that any increase in the minimum wage would destroy jobs rather than help create them.

But the protests, which have seen rioting in Paris and other cities and taken a heavy financial toll, are the biggest challenge for Macron since he came to power in May 2017 promising to revitalise the economy.

Since then his popularity has fallen with critics saying he favours the rich and alienates people struggling, especially in provincial France.

The 40-year-old centrist also announced he would roll back most of an unpopular increase in taxes on pensioners which was introduced by his government.

And he called on all businesses "that can afford it" to give employees a one-off "end of year bonus" which would then be tax free.

In another move to appease the protesters' anger, Macron said he would do away with all wage taxes on overtime work, a measure first introduced under former conservative president Nicolas Sarkozy but later reversed under his socialist successor Francois Hollande because it was deemed too expensive.

Macron, who has been in power for the past 18 months, earlier Monday had held four hours of crisis talks with government ministers, parliamentary leaders, business and labour representatives and regional officials.

He had previously vowed that unlike his predecessors he would not be swayed by street protests.

But in an initial attempt to quell the revolt now in its fourth week, the government agreed last week to cancel a planned increase in anti-pollution fuel taxes -- the spark behind the "yellow vest" protests in car-dependent rural and suburban France.

But the move was seen as too little, too late by the protesters, who held a fourth round of demonstrations on Saturday to press for further concessions on reducing inequality.

The campaign of nationwide road blockades and weekend protests in Paris and other cities over four consecutive weekends, which degenerated into destruction and looting, have taken a toll on the French economy.

The central bank on Monday halved its fourth-quarter growth forecast to just 0.2 percent from 0.4 percent -- far below the 0.8 percent growth needed to meet the government's full-year target of 1.7 percent.

Nationwide an estimated 136,000 people turned out for the protests last weekend -- the same number as a week earlier.

Since the start of the protests, over 4,500 people have been detained by police in France, police said.

Speaking of the violent actions of some of the protesters, who notably set fire to barricades on the Champs-Elysees and defaced the Arc de Triomphe monument, Macron said his government would show no leniency towards trouble-makers.

"No anger justifies attacking a policeman (...) When violence breaks out, freedom ceases to be," he said.

Reactions to his speech from the "yellow vests" were hard to judge as the movement is leaderless and has refused to come under the sway of political parties or trade unions.

Some protesters, interviewed on French television, acknowledged that Macron had made some "concessions", but added that these were "insufficient" to call the protests off.

"This time, there really is some progress. My smile got bigger and bigger as he spoke," said Erwan, one of the movement's "spokesmen" in the northwestern town of Rennes.

But, for Pierre-Gael Laveder, in the eastern town of Montceau-les-Mines, "Macron hasn't taken the full measure of what is going on".

"Everyone of his announcements was booed and the first overall reaction was 'he thinks we are fools'," Laveder added.

"He refuses to admit it's the (economic) model which he champions which is itself called into question," she added.

Jean-Luc Melenchon, who heads the left-wing opposition Unbowed France, said Macron was mistaken if he thought "a distribution of money" will calm down "the insurrection".