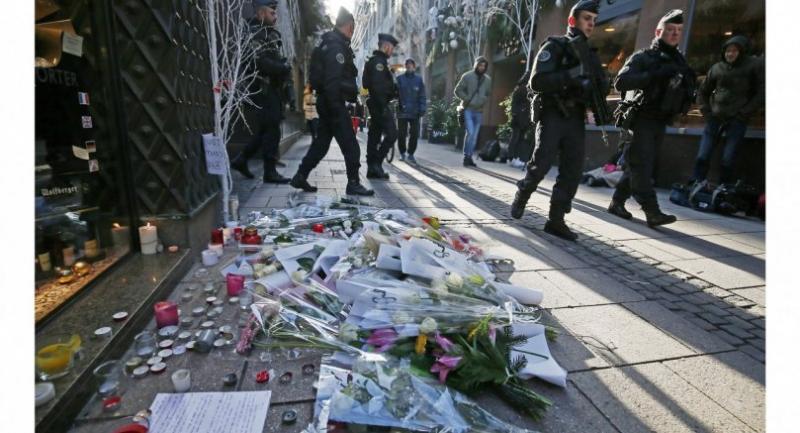 French police officers patrol near candles and flowers placed where a person was killed during the Christmas Market shooting in Strasbourg, France, 13 December 2018. // EPA-EFE PHOTO

THE BODY of a Thai tourist who was shot dead by a lone attacker in Strasbourg will return home as soon as the proof of identification is completed, French police have told the victim’s wife.

Naiyana, wife of Anupong Suebsamarn, 45, who was killed in a shooting at a Christmas market, is now in a better state of mind and is regaining her strength, Busadee reported.

She based her statement on a report from the Thai embassy in France, which sent diplomats to Strasbourg to help facilitate legal procedures concerning the return of Anupong’s body.

Naiyana is also entitled to the compensation given by the French government to the family of terrorism victims.

Anupong was among the three people killed in the shooting, which left many injured. The French government has upped its security alert to the maximum level following the incident, which has turned the city, usually crowded with tourists and visitors, into a ghost town.

The authorities are still hunting for the suspected attacker, a 29-year-old Strasbourg native identified as Cherif C, who cried “Allahu Akbar” as he opened fire and stabbed passers-by.

Meanwhile, Immigration police chief Pol Lt-General Surachet Hakparn met diplomats at the French Embassy in Bangkok, where he was assured that French authorities would provide assistance to Naiyana.

Surachet said Anupong’s family had contacted his bureau regarding the return of the body, adding that his bureau will fully cooperate and facilitate the return. French diplomats have also given assurances that their government will do its best to provide safety for tourists.

Meanwhile, deputy police spokesman Colonel Krissana Pattanacharoen said local police has been providing protection for the foreign diplomatic corps by deploying police officials to embassies and diplomatic agencies. He said the measures have been taken even though Thailand is not a target or a party in any related feuds.