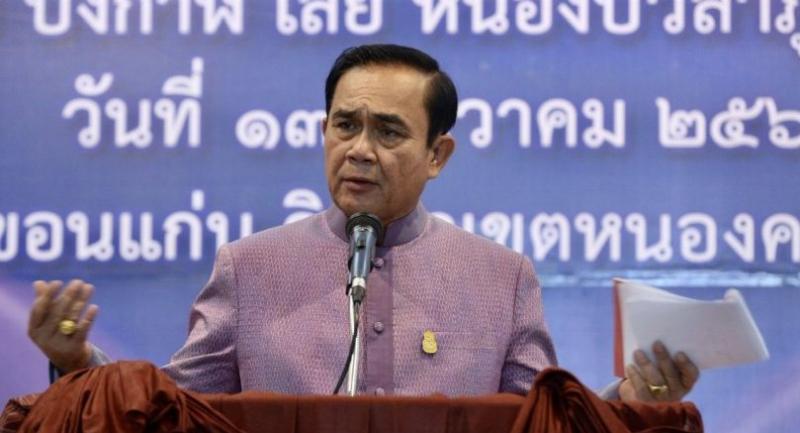 PRIME MINISTER Prayut Chan-o-cha and his government yesterday came under attack from politicians taking advantage of the junta’s lifting of political restrictions on Tuesday.

Key figures of many parties slammed what they said were the many problems this junta-led administration had created over the four years it has been in power. They were in agreement that a change of government was needed.

Most of the parties who spoke up yesterday are linked to former prime minister Thaksin Shinawatra, who has been living in self-imposed exile overseas since 2008.

On Tuesday, the ruling National Council for Peace and Order (NCPO) partially repealed nine of its previous orders that restricted political activities since the 2014 military coup. The NCPO effectively lifted the ban on political gatherings of five or more and allowed parties to hold meetings and other activities of a political nature.

Veteran politician Chaturon Chaisang said the country had been at a standstill for many years under dictatorship.

“The country is ruled by a leader who lacks maturity and cannot be scrutinised. People have no right to air their sufferings. The leader keeps yelling at them,” he said.

Chaturon, who heads the election strategy committee of Thai Raksa Chart Party, said Thais should no longer tolerate the sufferings inflicted by the junta, which includes the widening gap between the rich and the poor. Also, he said, Thailand needs a democratically elected government if it is to restore international confidence.

“Dictatorship must be replaced with democracy. We cannot change General Prayut’s thoughts, so the only way out is to change the government,” he said. The politician, who recently left the Thaksin-linked Pheu Thai Party, claimed his new party knows how to solve the country’s problems.

Chaturon also asked Prayut to state clearly that he will not issue any more orders as junta chief in the run-up to the election that will put a pro-NCPO party at an advantage.

Thai Raksa Chart’s meeting for election candidates was held yesterday at Muang Thong Thani in Nonthaburi province. Present at the event were the party’s executives and key figures, including its young leader Preechapol Pongpanit.

Khunying Sudarat Keyuraphan, who leads Pheu Thai Party’s election strategy committee, said yesterday that it was time for “people who can work” to run the country.

“Over the past four to five years, people have been suffering and falling under the burden of debt. It is time to allow political parties that can make money to run the country. We don’t want people who can only spend money,” she said.

Sudarat was speaking while meeting constituents in the Northeast province of Si Sa Ket.

Tourism suffering ‘as country is not democratic’

Jatuporn Promphan, a senior figure in Puea Chat Party, which is also linked to Thaksin, said many of the country’s problems have remained unsolved under this junta-led government. Also, Thailand’s bargaining power in the international community has diminished because it is under military rule, he said.

“Tourist arrivals have declined because the country is not democratic,” Jatuporn, who is a red-shirt leader, said.

He also said a free and fair election was necessary to prevent conflict and chaos following the national vote.

“Our country has suffered a lot of damage already. So, all sides should make sacrifices to ensure peace. The election must be held properly so we can get a good and legitimate government,” he said.

Seripisut Temiyavej, leader of Seri Ruam Thai Party, said yesterday that the longer the Prayut government stays in power, the gap between the rich and the poor will become wider.

“This government favours capitalists who get richer and richer, yet ordinary people get poorer,” he said while meeting with voters in Bangkok’s Asok area.

The former national police chief-turned-politician also said it was time for the country to get a democratically elected government. “Whether it is good or bad, at least you can scrutinise it, unlike a dictatorship,” Seripisut said.