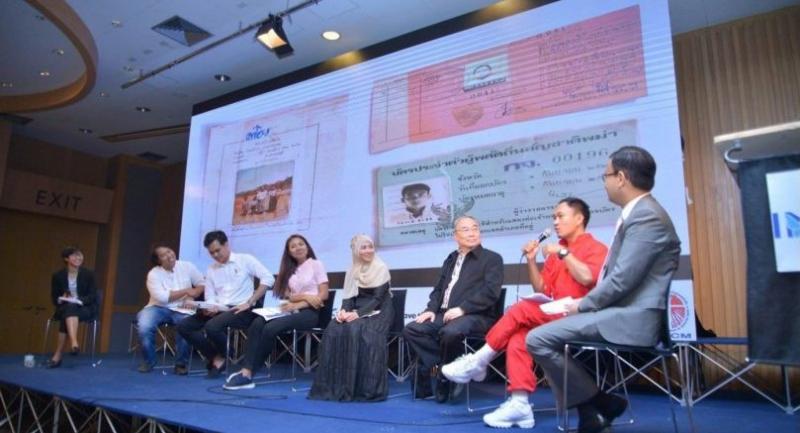 BIG CONGLOMERATES are known to have a strong influence over government policy, so they should use their leverage to improve the lives of migrant workers and push for better labour rights protection, academics said yesterday. With more and more people crossing borders to seek better opportunities, migrant workers become most vulnerable to human-rights violations and social injustice, which is why all stakeholders should protect their rights and support their quality of life, academics said.

They were speaking at a public forum held in Bangkok to mark International Migrants Day yesterday.

Lae Dilokwittayarat, an economics professor at Chulalongkorn University, said large conglomerates hold significant power and have a great deal of influence in government policies and the country’s economy.

“The business sector does not only have a strong influence in Thailand’s capitalist society, many big firms also hire a large number of migrant workers. They also have great access to government policy setting, which they should use for the constructive improvement of labour-rights protection,” Lae suggested.

“The government cannot solve all problems by itself. Help from the private sector, and NGOs, is necessary. Also, the government can never fathom the needs of the business or the labour sector,” he said. Adisorn Kerdmongkhol, coordinator for the Migrant Working Group (MWG), said that despite the many positive developments in the protection of migrant workers’ rights this year, many aspects of labour rights are still not properly respected or protected. The government has recently ratified international conventions to tackle human trafficking and forced labour in the seafood industry.

“This year the government refused to recognise 1.9 million unofficial migrant workers, and forced their employers to get them registered.

“From now on, businesses can hire migrant workers through the MoU [memorandum of understanding] system only,” Adisorn said.

Though the government is making a concerted effort to tackle the problems of human trafficking and illegal migrant workers, he said, the implementation and management of the policy is poor. That has led to as many as 811,000 migrant workers still stranded without any documentation. Also, he said, tougher regulations are escalating cases of migrant rights violation.

He added that, as of now, the government has to follow the guidelines of the international labour-rights protection convention that it has ratified, and in order to do that it will have to improve mitigation measures to ensure the rights and well-being of migrant workers.

Don Thacharoensak, who has been studying Thai migrant workers in South Korea, said they too are facing serious problems of rights violation.

According to his study, there are around 160,000 Thai workers based in South Korea this year, but only 14 per cent, or 24,022 of them, are legally registered.

Even though many Thai workers in South Korea are still doing dirty, dangerous and difficult jobs that are shunned by the locals, he said many Thai workers are also shifting to other sectors, such as restaurants and convenience stores.

“The transboundary labour movement is something spontaneous; if there are better opportunities out there, people will try to grab them to improve their lives and well-being,” he said.

He added that the only way this problem can be solved is to look at the bigger picture, as it is a globalised problem – workers move from poorer countries to meet the labour demand in richer countries.

“We need to remember that migrant workers are not criminals – they are just people seeking to improve the well-being of their family. So, we need to focus on humanity and prioritise human rights,” he said.