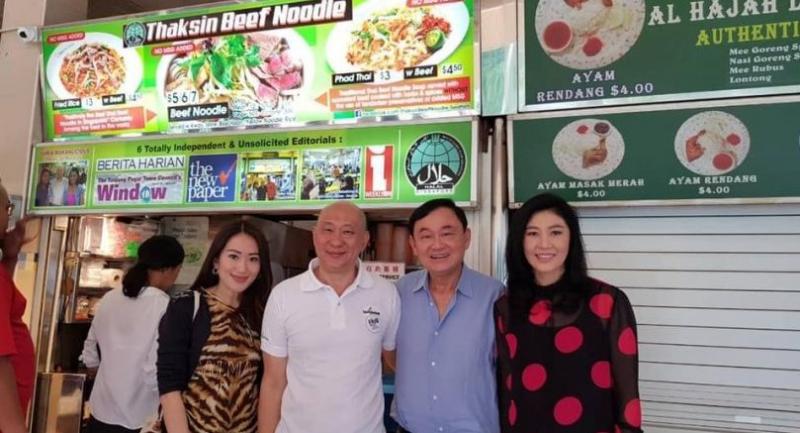 By The Nation
Asia News Network

PETALING JAYA - Former Thai prime minister Thaksin Shinawatra’s visit to “Thaksin Beef Noodle” in Singapore this week was made after somebody told him about it.

Thaksin has been living in self-imposed exile after being overthrown in a 2006 coup and was later sentenced in absentia to jail for corruption.

Yingluck, who was Thai premier from 2011 to 2014, also fled the country in August 2017 before a Court found her guilty of corruption and negligence.

Ing wrote that the owner of the stall was very happy to welcome them.

Ng also told Yingluck that she is very pretty and turned to Ing and asked her whether she would be the next beautiful prime minister of Thailand.

She further wrote that she was glad that there was still somebody who loved and admired her father and aunt.

According to the Star, the stall received a surprise visit from not one, but two former Thai prime ministers.

“I was elated. After all, I named my stall after him,” the 64-year-old was quoted as saying to CNA.

He said he had wanted to meet Thaksin ever since naming his shop after him.

“I knew deep inside that I would meet him,” Ng said, adding that his stall had subsequently built up a following.

CNA reported that Ng’s love for Thai beef noodles began in 1987, when he spent a year working in Bangkok.

It said when Ng finally met Thaksin, he asked the former prime minister: “What took you so long?”

Ng said the former prime ministers liked his food, especially his pad thai and dried chilli, adding that Yingluck even took a packet of his dried chilli home.