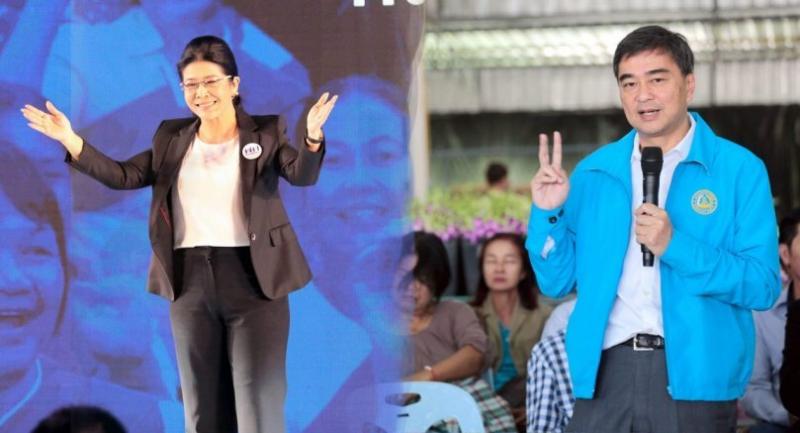 Both parties slam govt for economic shortfalls, accuse it of widening the national income gap The Democrat and Pheu Thai parties unveiled their election platforms and key candidates for the national elections scheduled for February, with a focus on economic issues and state welfare.

Both parties’ events were broadcast live on Facebook and other social-media platforms, which have become popular channels to reach voters. Abhisit said that, if elected, the Democrats’ first move would be to accelerate the issuance of title deeds for landholders to replace other, inferior types of documents. For instance, he said, the Sor Por Kor document for land granted to small-scale farmers would become an “inheritance” document that could be used as collateral for loans.

Second, the party would establish a community water fund to help farmers get access to water resources year round, Abhisit said.

Third, it would guarantee a minimum income for all farmers – rice farmers would receive Bt10,000 for every tonne of rice produced, rubber farmers Bt60 for every kilogram of rubber sheet, and palm-oil farmers Bt10 for every kilo of palm oil. The cost of farming would also be insured, he said. The party would guarantee an annual minimum income of Bt120,000 for labourers. Senior citizens would get Bt1,000 every month, and people earning less than Bt100,000 a year would get Bt800 per month.

However, Abhisit did not reveal how his party would finance these projects, saying that would be explained later. He also said the planned measures aimed to narrow the widening income gap. As for Pheu Thai, former transport minister Chatchart and Khunying Sudarat figured prominently at the party’s unveiling of its policies on Friday, at an event attended many MP candidates and party members. He said people in Amnat Charoen province reported a worsening problem with illicit drugs in rural areas, which he blamed on economic difficulties.

The former minister noted that the economic outlook has been battered by the lack of public and investor confidence, which he said would only be restored if the election is transparent and fair.

He criticised the government for pushing construction of a high-speed train system linking Suvarnabhumi, Don Mueang and U-tapao airports instead of opting for an inter-provincial railway that would deliver more economic benefit and spread public infrastructure development to other parts of the country.

Chatchart said the government’s welfare card system was inefficient and had not helped stimulate the economy because it was only a temporary solution to tackling poverty.

Instead, he said, the next government must ensure that people have better opportunities to reduce their poverty.

Sudarat, who chairs the party’s election strategy committee, said people everywhere – from downtown Bangkok to Khon Kaen, were unhappy with the government’s performance because the economy remained sluggish and household debts were rising.

She said Pheu Thai had more experience in economic management and would deliver a better economy if chosen to form the next administration. Sudarat said the current government’s performance showed that economic benefits were not being distributed properly, resulting in greater inequality.

She also accused the government of being unable to generate new income and of opting for tax hikes to cover budget shortfalls.

Instead, she said, her party would focus on boosting the prices of farm produce to tackle poverty and give the country a bigger role in international trade.

Sudarat is believed to be frontrunner for the job of Pheu Thai leader, a post currently held by Pol Lt-General Viroj Pao-in.