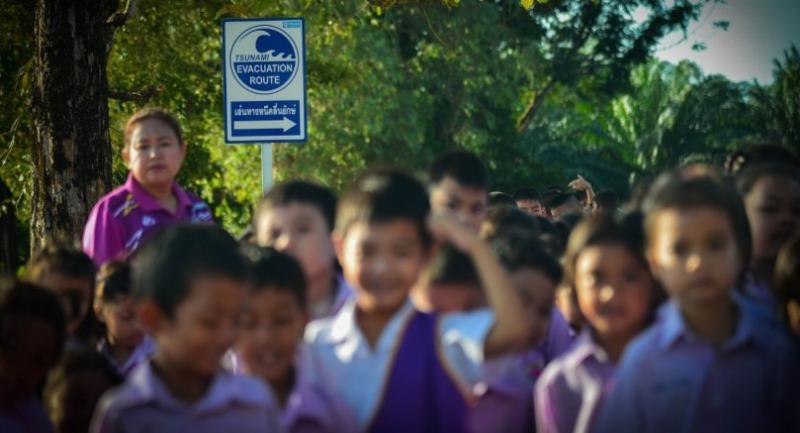 Students walk to a safe area during a tsunami emergency drill organised by their school, along with the UN Development Programme and their other partners. // UNDP PHOTO

INDONESIA was again hit by a tsunami on Saturday, bringing back memories of Thailand’s trauma 14 years ago, and raising questions about how prepared our schools are for a future disaster. Originating in Indonesia and spreading through the Indian Ocean, the giant 2004 wave destroyed the fishing village of Ban Nam Khem, wrecked the school and killed as many as 4,000 Phang Nga residents.

“When the tsunami hit Phang Nga province, the eldest students in our school were only a year old at the time,” teacher Aporn Malison, senior teacher at Ban Nam Khem School, told The Nation. Despite being very close to the Andaman coast, her school lacked a systemic evacuation plan – until recently.

“Usually when a tsunami alarm is raised, the students will simply run to the third floor, which is [considered] a safe evacuation area,” Aporn said, outlining the yearly tsunami drills conducted by local officials and villagers.

The agencies organised workshops for teachers so they could develop evacuation maps and plans, while students were taught basic first aid and CPR skills. The agencies also helped create tsunami educational materials. Each school then held their own emergency tsunami drill to test it, with the aim of ensuring their students were ready if another wave hits the Andaman coast. The 18-month programme has prepared 1,731 students and teachers in total.

“The drill is detailed and systematic,” Apron said. As soon as the alarm rings, each teacher is on guard until all 270 students are safely assembled on the highest floor of the school. There is an evacuation team, a first-aid team and search-and-rescue teams among others, with the school director leading the operation, she said.

Teachers are prepared with walkie-talkies to use for communication should the power and telephone lines be destroyed during the natural disaster.

In the recent drill, UNDP officials intentionally hid a few of the students, so teachers could count ever head and send out a search-and-rescue team to ensure nobody is left behind, Aticha Chaivichian, UNDP’s project coordinator for the programme, said.

“We have also taken into account students with physical disabilities and their specific needs,” she added.

In Phraratchatharn Thublamu School, for instance, the evacuation routes were upgraded to become more wheelchair-friendly. Ban Bang Niang School, meanwhile, has set up a “buddy system”, in which students with disabilities are accompanied to the safe zone by their fellow classmates and teachers. UNDP has also developed a guidebook, with technical support from the Disabilities Council of Thailand, so other schools can set up their own evacuation plan for students with and without disabilities.

Angoon Wongcharoen, chief of the Thai Red Cross Health Station No 14, said Prathom 4 students and above are being taught how to call for help, deal with broken limbs and other minor injuries, as well as how to transport incapacitated classmates and how and when to do CPR.

She said these students are being taught how to do all these things in real-life situations “by using their hands and the materials they have at hand like sticks, cloth, rope and cardboard”.

These five schools in Phang Nga are among the 114 schools in 18 Asia-Pacific countries participating in UNDP’s “Strengthening School Preparedness for Tsunamis” initiative, funded by Japan. The challenge for UNDP now is to make the project sustainable.

Japan agreed this month to fund the project’s second phase, with the aim of getting local authorities to scale up emergency drills to other schools facing natural disasters.

“Drills need to be conducted regularly since new students are enrolled every year. With nearly 1,000 schools in Thailand at risk, the need to scale up exponentially is a challenge,” she said.

“Once the guidelines are built into the school system [the procedure will be sustainable] even when one school head retires and someone else comes in. It is there for them to follow as important guiding principles. So, students keep practising and it doesn’t take them by surprise one day if a tsunami strikes again,” she said.

Aporn wants to ensure her school remains prepared even as new generations of students and teachers come and go.

“If the local government authorities and local communities continue to conduct the drills, then so will we,” she said.