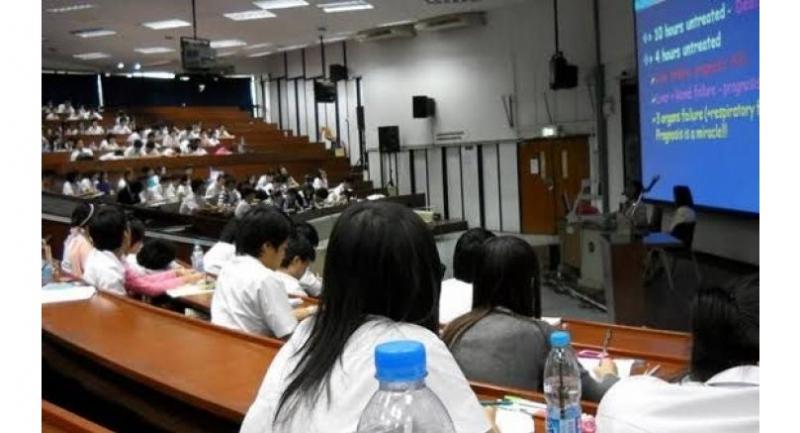 THE COMING year will be challenging for Thai universities due to the falling birth rate, technological disruption and the fast-changing needs of students and employers, educators acknowledge.

No longer does the number university applicants dwarf the number of available seats. Even if high-school graduates are denied a place in the programme they favour, ample opportunities are available elsewhere.

In number of applicants handled by TCAS in 2018 was far lower than the number of seats on offer, notes Suchatvee Suwansawat, president of the Council of University Presidents of Thailand (CUPT). “And this year there is an even bigger difference.”

He said only about 300,000 students had applied so far for TCAS 2019, compared to 390,000 seats available at participating institutions.

Suchatvee, who is also president of King Mongkut’s Institute of Technology Ladkrabang, expects the coming year to put all higher-education institutes to a tough test.

Compounding problems over Thailand’s birth rate, which has been on the decline for decades, is fast-evolving technology. Students can glean most of the information they need directly from Google searches, and many free or inexpensive tutorial courses are available online, including in the form of YouTube videos on a huge range of topics.

Deputy Education Minister Udom Kachintorn recently warned universities that if they do not adapt to the changes quickly, they would be “left behind”. He even predicted that several Thai universities would close or be merged with others in the near future.

Rather than competing for a dwindling number of secondary-school graduates, Udom said, the universities should focus on upgrading the skills of the 35-million-strong workforce. The CUPT has established a University Learning Reform Committee to help educators adjust.

“It’s time we also thought about offering interesting courses to university graduates and to people age 60 or 70,” he said.

Antika Sawadsri, dean of architecture at King Mongkut, urged universities to accept that they must do more than simply churn out graduates.

“Conduct research and provide academic services in collaboration with the government and the private and civic sectors,” she advised.

They should integrate more technology into their teaching and help enhance the value of what Thailand produces. She would like to see the schools serve as centres for lifelong learning.

“Lecturers can’t just teach what’s in textbooks,” she added. “Their role must be about screening information and coaching.”

National Economic and Social Development Board secretary general Thosaporn Sirisumphand said his agency was trying to determine which professions were likely to be replaced by artificial |intelligence.

Thosaporn expects the education sector, in particular vocational education, to keep pace with technological trends so that the workforce functions well in the future.

“When investors look for skilled workers, we should be able to provide them,” he said.

Vocational and STEM subjects – science, technology, engineering and mathematics – should be emphasised, he said, with educational institutes alert to new trends and shifts in context.

Several universities are collaborating with the NESDB to address mounting challenges.