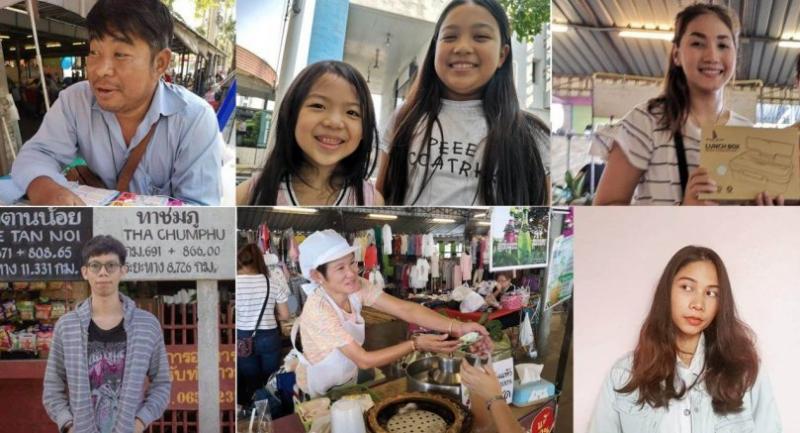 SHEDDING a few kilos, upgrading skills, buying a tractor – these were some of the New Year resolutions Thais made for 2019. Here’s a glimpse of some hopes and wishes for the New Year. “I want to buy a new tractor,” said Apiwut Suanborae, as he was handing out a lottery ticket to his customer in a market in Bang Na district in Bangkok. Like he did yesterday, Apiwat sometimes travels to Bangkok to sell lottery tickets, which help him cover his daily expenses, but his main job is that of a rice farmer in the small province of Chai Nat. A new tractor would cost him about Bt700,000 to Bt800,000. Asked what wishes the farmer wanted the new government to fulfil, he said they could not fulfil his hopes. “Can they allow farmers to price their crops like when bakers sell their bakery?” he asked. “I want to lose weight,” said Nicharee Thaiprajong, sporting a smile. The pretty 25-year-old said she wanted to weigh 45 kilograms instead of the 51. Nicharee and her mother were selling some eco-friendly tableware imported from Taiwan. A piece of her food container costs about Bt200.

Income inequality is what the government must tackle, Nicharee said.

“I want them to ease the widening gap. The middle-class keep paying taxes but the poor don’t. And the rich usually evade taxes,” she said. “I want to buy a gift for my mother,” sixth-grader Chaniporn Sagurnchairoj said shyly, standing behind her mother and father who were packing up after the market had closed for the day.

Chaniporn said her family had left their rubber plantation in Ranong province to sell children’s clothes in various markets in Bangkok. Her father said they owned 30-40 rai of rubber plantations but the crop’s low prices had forced them to sell almost half of their land.

“I want the government to help raise the rubber price. So, my dad and mum don’t have to come to Bangkok and we can go back to Ranong,” the 11-year-old said.

Her little sister, Kanyapat, 6, meanwhile, said she hoped the prime minister would buy her a pack of Harry Potter candies, so she could taste the famous earwax-flavoured candy bean. “I want to accomplish what I could not last year,” said Piyarat Punpoosa. Just heading out of college this year, she said she wanted to secure a job at a publishing company, get a driver’s licence and brush up on her Italian, the language she studied in college. “I have studied many languages, but they get rusty with time. I don’t want to forget Italian,” she said.

Asked what she wanted from the government, the new graduate said she wanted them to restore Thailand’s image as a democratic country. “I want the government to respect our political rights and freedom,” said Piyarat.

“I think Thai people are tired of politics and conflicts, but we should always be critical of the ruling government and ‘make political moves’ when we need to,” she added. “I will learn skills to boost my salary,” said Worapong Rattanapongkawee. Working as a programme tester, he says next year he will learn programming languages like python, Java and HQL.

“I want to improve my English, too. Many of our vendors are foreign companies from countries like India. We use English in emails all the time,” he added.

Asked what he wanted from the state, he said he hoped criminals would be prosecuted.

Premeditated murder, he said, should get a death sentence at maximum. “I don’t want a criminal to be released after 3 or 4 years in jail to commit another crime,” he said.