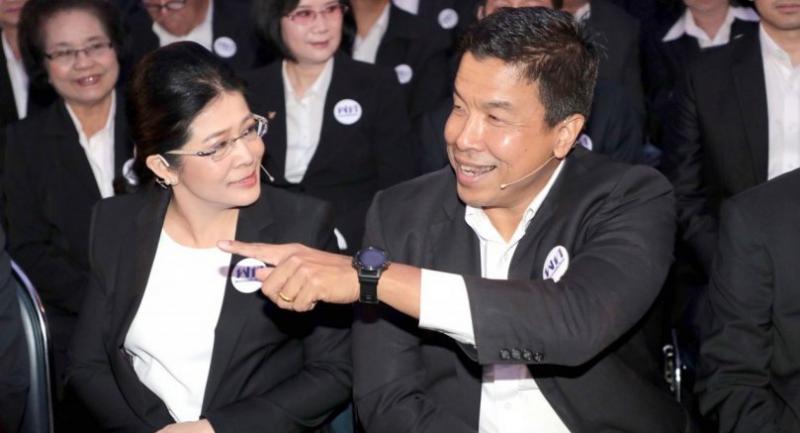 The survey found that if Chatchart led the government, the party could expect to win around 220 seats in the 500-member Lower House. On the other hand, under Sudarat the result would be between 190 to 200 seats, according to a Pheu Thai source.

“So, a change in strategy to put Chatchart at top of the list is possible, taking into consideration the popularity poll,” the source said. Reacting to the report, Sudarat admitted that Pheu Thai had indeed discussed that possibility.

Sudarat had all along been seen as Pheu Thai’s No 1 PM candidate, considering her political seniority as well as her close ties with both the Shinawatra camp and good relations with the Army, mainly General Prawit Wongsuwan. Chatchart was out of the picture because of his sabbatical from politics after the 2014 coup to serve as the chief executive officer of a giant real-estate developer.

However, it cannot be denied that the former transport minister remains one of the most popular politicians, loved especially by young voters and netizens. Chatchart has been dubbed as “the Strongest Minister of Them All” after a photo of him in running shorts carrying a bag of traditional Thai rice, showing his down-to-earth character, went viral on the Internet.

Chatchart on New Year’s eve hinted on his Facebook page that he was ready to return to politics, describing 2019 – which sees Thailand’s first election in years – as “the final battle”.

Critics believe Chatchart could be Pheu Thai’s saviour amid intense competition and all the difficulties in the upcoming election.

Apart from Pheu Thai’s internal affairs, these moves in part reflect confidence about the poll taking place, although the Royal Decree has not been issued to announced February 24 as the election date.

Although the possibility of an election delay was reported last week due to complications related to the printing of ballots, Abhisit said there had been no statements from the authorities.

The Election Commission has one month before the election to print the ballots, he said. The task could be done in half the time, he added.

Abhisit said he hoped the Democrats would win the election with more than 100 seats in Parliament.

The Democrat Party was willing to work with any party sharing the same ideology to protect the national interest, including the junta-appointed Senate, he said. If the Democrat Party leads the government, Abhisit said he was confident it could run the country and would not run into conflict with the Senate.