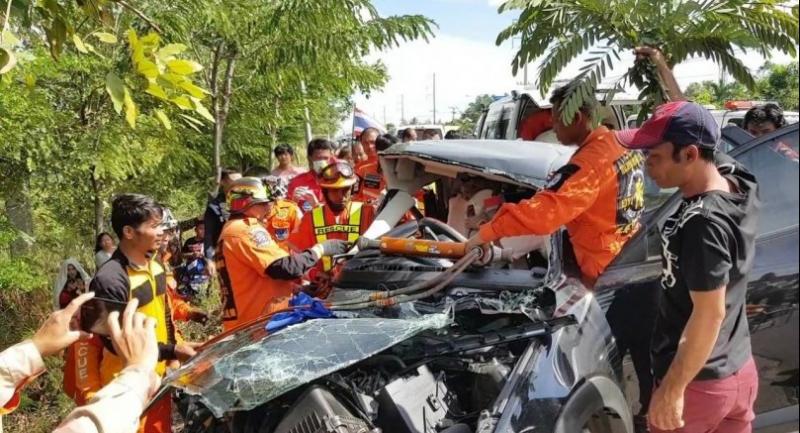 Though the number of road accidents is lower this year compared to the “seven dangerous days” last year, drunk driving and speeding remain the key contributing factors in crashes and account for most of the arrests, Interior Minister Anupong Paojinda said on Wednesday.

Anupong made this remark before the Disaster Prevention and Mitigation Department’s Road Safety Centre (Thai RSC) announced a tally of 410 deaths and 3,516 injuries in 3,425 road accidents in the first six of the holiday period’s “seven dangerous days”.

General Anupong said additional measures will be discussed to reduce the loss of life stemming from these factors, and more analysis will be done on hazardous highways, secondary roads and periods of the day. “Agencies will then have to assess whether the new measures are sufficient to lower the death toll or whether even more measures are needed, such as promoting driver discipline or introducing harsher punishments,” he said.

“We have to assess the effectiveness of the measures one by one. I will try to do this as soon as possible so we will be better prepared to handle the reasons that cause the most deaths year-round, not just during the festive season.”

On New Year’s Day alone, there were 664 road accidents, which claimed 89 lives and injured 675 others, he said. Drunk driving remains the main cause at 43.22 per cent, followed by speeding at 31.48 per cent.

In a separate press conference, NCPO deputy spokeswoman Colonel Sirichan Nga-thong said 4,545 vehicles (3,338 motorcycles and 1,207 automobiles) had been seized from drunk drivers from December 27 to January 1.

Meanwhile, Probation Department chief Prasarn Mahaleetrakul reported that Thai courts had during the same period put offenders in 6,390 cases on probation – 5,903 of them were drunk drivers, 446 drove under the influence of narcotics, 39 were guilty of reckless driving and two of speeding. On January 1 alone, 119 drunk-drivers were put on probation, he added.

The three provinces with the highest number of drunk-driving cases in the first six days of the holiday period were Bangkok (413), Maha Sarakham (411) and Sakhon Nakhon (382), Prasarn said. So far, 67 drunk drivers – 35 in Bangkok, 14 in Khon Kaen, 12 in Buri Ram, five in Ratchaburi and one in Rayong – have been ordered to wear electronic monitoring devices since January 1.

Apart from being fitted with the devices and being banned from driving for six months, the 67 have also been banned from going out between 10pm and 4am for 15 days, must report to probation officials periodically, undergo four sessions of traffic regulation training and do 24 hours of community service. Repeat offenders – those caught driving under the influence of alcohol three times or more – will have to undergo a programme to screen for alcoholism and will be admitted to hospital for treatment, Prasarn said.