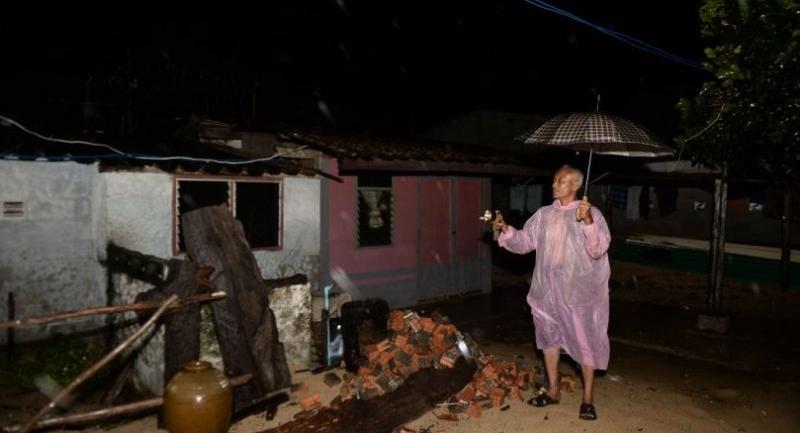 This photo taken on January 3 shows a man inspecting damage to his house due to tropical Storm Pabuk in the southern Thai province of Narathiwat. //AFP

Boats were recalled to shore across the Gulf of Thailand, while two key airports -- Koh Samui and Nakhon Si Thammarat -- were shut until Saturday, leaving tourists who remain on islands now cut off from the mainland.

"Ten thousand tourists are still on Koh Phangan," said Krikkrai Songthanee, district chief of the island which neighbours Samui and is famed for its full-moon party.

"But I talked to foreigners last night and they are not scared, they understand the situation," told AFP.

Pabuk, the first tropical storm in decades to strike during the peak holiday season, is expected to make landfall on Friday evening with the eye passing over Nakhon Si Thammarat further to the south.

"But all tourist islands in the Gulf of Thailand including Koh Samui, Koh Phangan, Koh Tao will be affected because Pabuk is huge," said Phuwieng Prakhammintara, head of the Thai Meteorological Department.

As it churns through the sea, Pabuk has picked up speed with 75-kilometre-an-hour (45 mile) winds stirring huge waves of up to five metres high (16 feet).

With rains lashing the entire south, the Meteorological Department warned coastal communities to expect "inshore surges" as winds whip up the sea.

Pabuk is forecast to pass over the narrow neck of land between the Gulf of Thailand and into the Andaman Sea -- home to the tourist resorts of Phuket and the Similan National Park, a diving paradise.

Tens of thousands of tourists have already fled the southern zone.

On neighbouring Koh Tao, one of Southeast Asia's most popular dive spots, tourists and residents were bracing for a torrid 24 hours ahead.

"The weather is turning worse as the winds pick up, I've finished buying supplies... there's no gas anywhere on the island, 7/11 is already running out of things," a Spanish dive instructor told AFP.

"We're ready to bunker down."

Thailand's economy is heavily reliant on tourism with the latest figures for 2017 showing the kingdom made nearly $60 billion from the sector.

Tourism was hit hard by a boat accident in Phuket in July last year when scores of Chinese tourists died as their overcrowded boat capsized in heavy seas.