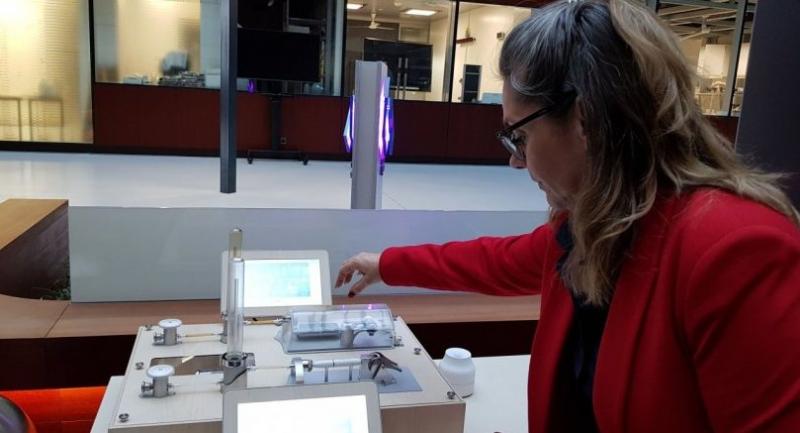 A researcher at The Cube demonstrates how a conventional cigarette produces smoke and how a smoke-free product produces aerosol./Jintana Panyaarvudh

Inside "The Cube" – an all-glass square building sitting on the edge of Lake Neuchatel in Switzerland – more than 400 scientists and researchers are busy conducting studies to develop alternative and less harmful products to create a smoke-free future.

Andre Calantzopoulos, CEO of Philip Morris International, announced this mission in what was deemed a “revolution” in the tobacco industry in 2016 – calling on smokers to switch to smoke-free alternatives as soon as possible.

He said his company’s ambition was to replace cigarettes with less-harmful alternatives to help create a smoke-free society. Maybe, he said, one day Philip Morris will even stop producing tobacco products.

However, there are tough challenges ahead because the public is still questioning the real intentions of this 170-year old tobacco giant. It will not be easy to convince people that Philip Morris, the maker of many well-known cigarette brands, will eventually shift its focus to other products.

This shift has become a global trend, as people are becoming more concerned about their health, while smokers who are not able to quit cold turkey are turning to new innovations.

Hence, this US tobacco company decided to conduct studies as it is aware that scientific research will be the best way to convince people of its mission to replace conventional cigarettes with smoke-free products. The company woke up to the challenge nearly a decade ago, and has been researching the subject since then, said Tinat Chowdhry, Philip Morris’ global communications manager.

It launched its first smoke-free product in Nagoya, Japan and Milan, Italy in 2014, and has invested over US$4.5 billion (Bt148 billion) in researching and developing less-harmful alternatives to cigarettes.

In 2009, the giant built “The Cube”, its first, state-of-the-art R&D facility in Neuchatel, Switzerland, and another in Singapore a year later.

Most doctors and scientists working at the Swiss facility were recruited from the fields of pharmaceuticals and life sciences, Chowdhry said.

The researchers have conducted an array of laboratory tests and done many experiments – both clinical and non-clinical – on aerosol chemistry studies in order to develop products that are less conducive to tobacco-related diseases. They have also been assessing the products’ impacts using rigorous scientific methods.

The results to date show that smoke-free products, though not risk free, are less harmful compared to cigarettes, Nuno Fazenda, manager for scientific and public communications at Philip Morris, said.

In his power-point presentation of the work done so far, he said that though smoke-free alternatives still contain nicotine, they generate no combustion and hence no smoke. He explained that nicotine is not the primary cause of smoking-related diseases, but the combustion that creates smoke is. In other words, cigarettes that burn tobacco are the main source of harm.

The pad on the left shows the impact from cigarette smoke, while the one on the right shows the effects of an aerosol PMI smoke-free product.

In two three-month studies – one in the US and the other in Japan – it was learned that smokers who switched completely to THS reduced their exposure to certain HPHCs based on the measurements of biomarkers of exposure. These levels of reduced exposure were close to the participants who had given up cigarettes for the three-month duration.

Research also showed negligible interest in THS products among non-smokers or among those who have quit smoking, and showed substantial potential for adult smokers to switch fully.

“As a tobacco-maker, there is huge history we have to overcome. It’s difficult to change perception. It will take time,” Chowdhry said. “A lot of explaining is needed to tell people we are intentionally trying to stop selling tobacco.”

Hence, she said, Philip Morris is putting all its efforts and spending huge sums in researching smoke-free products and has even set up factories dedicated to producing THS items.

In 2015, its factory in Bologna, Italy, became the first to be fully dedicated to the production of THS units. Philip Morris is also converting some of its cigarette factories to produce “heated sticks” that are used for smoke-free devices, Chowdhry said.

The World Health Organisation estimates that the number of smokers in 2025 will remain the same as now – roughly 1.1 billion. Meanwhile, Philip Morris projects that at least 30 per cent of its brand – around 40 million smokers – will switch to smoke-free products by 2025, Chowdhry said. One of the main hurdles tobacco companies face are the complicated laws and regulations in different countries.

Thailand, for instance, has banned production, import, sale and possession of e-cigarettes since 2014, and violators can face arrest and jail.

A network of e-cigarette users called End Cigarette Smoke Thailand group earlier submitted 40,000 signatures in a campaign to legalise e-cigarettes and suggested that it be turned into a “controlled” instead of “banned” substance.

Philip Morris (Thailand) (PMTL) has echoed this, saying more appropriate regulations would be better at discouraging people from smoking.

Opponents, especially officials from the Public Health Ministry, insist that e-cigarettes remain prohibited, as they believe the devices are hazardous to health and could lure young people into smoking.

According to the Department of Disease Control, e-cigarettes are popular among teenagers because of their attractive designs and elements. The department cited many reports of youth getting addicted to conventional cigarettes or narcotics after starting the habit with e-cigarettes.

Also, the department said, e-cigarettes are hazardous to health because apart from nicotine, like conventional cigarettes, they also contain carcinogens and other harmful and addictive substances.

In response, the Commerce Ministry’s Department of Foreign Trade recently set up a working panel to review the ban. Officials from the Department of Disease Control’s Bureau of Tobacco Control and the Office of the Consumer Protection Board arrested street vendors selling electronic cigarettes and nicotine chargers last month at the Liab Duan night market in Bangkok’s Ramindra area.

“There is no question that tobacco products are harmful to health, and the best approach is to stop or never start smoking,” Pongsathorn Ansusinha, director of corporate affairs at PMTL, said.

Nonetheless, many people will continue smoking, but we believe they have the right to access accurate information about smoke-free products, he said.

According to the Office for National Statistics, 10.7 million Thais are smokers and 15 million are subjected to second-hand smoke, which means the total cost the country has to foot from smoking is about Bt75 billion.

A recent survey sponsored by PMTL found that 64 per cent of the 1,200 respondents, both smokers and non-smokers, want their family and friends to opt for less-harmful products due mainly to health concerns.

Pongsathorn said Philip Morris was ready to cooperate with the authorities on appropriate regulations for smoke-free products.

“Smoke-free products contain nicotine, are addictive and are not risk free. But they are a better choice for smokers who want to continue using tobacco products.”