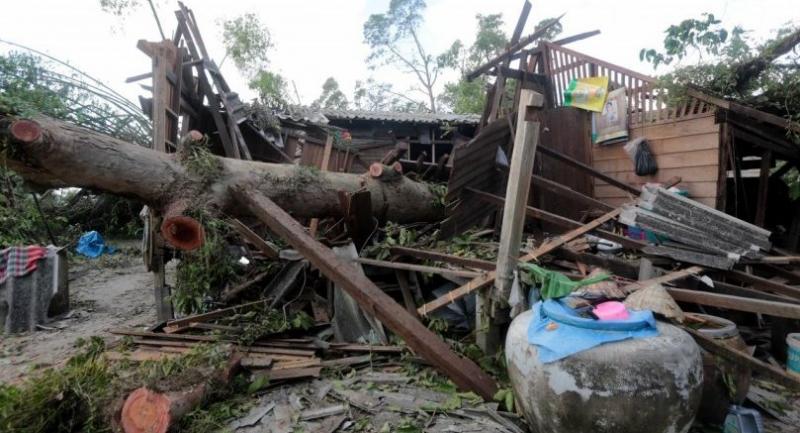 Scenes of destruction wreaked by tropical storm Pabuk, like this damaged house in Ban Chang-hoon of Nakhon Si Thammarat’s Muang district, are a common sight throughout the province a day after the storm’s exit. AUTHORITIES and the public sector have won praise from experts for their role in disaster prevention and management during tropical storm Pabuk, which academics say minimised casualties and damage.

The Disaster Prevention and Mitigation Department reported yesterday that three people had been killed by the impact of the intense storm that buffeted Nakhon Si Thammarat and Pattani, while one person was still missing. The department’s director-general, Chayabol Thitisak, yesterday said that 18 provinces in the southern region and along the coast of the Gulf of Thailand had suffered damage from the storm, strong winds and flash floods brought by the heavy downpour.

Chayabol said due to the severity of the storm that hit Thailand on Thursday, some 213,000 families, or some 696,000 people, had been affected, while 2,240 were still displaced and had to stay at the remaining 24 evacuation centres in Nakhon Si Thammarat and Chumphon.

The Centre for Economic and Business Forecasting of the University of the Thai Chamber of Commerce estimated that tropical storm Pabuk had caused up to Bt5 billion in economic damage. The storm led to suspension of operations at airports in Nakhon Si Thammarat and Surat Thani, and of sea transport in both the Gulf and Andaman Sea, and severely disrupted the tourism industry in the South in its high season.

Seri Supharatid, director of Rangsit University’s Centre on Climate Change and Disaster, praised the authorities and the strong public sector, saying their efforts in mitigating and helping cope with disasters during the storm had saved a lot of lives.

“Even though this storm was very powerful and comparable to [1962] tropical storm Harriet, a good weather forecast system, as well as an advance disaster warning and evacuation, ensured there were only a few casualties,” Seri said.

However, he said that there was still room for improvement, as disaster warnings given by authorities were too slow and not clear enough to leave enough time for evacuation. As a result, the evacuation was conducted in the critical moments before the arrival of the storm and people were still heavily reliant |on the official warning system, he said.

“We have to improve our disaster preparations, as this is only our first test. The world climate is becoming more unstable due to climate change and we are going to face more extreme weather and intense disasters in the future,” he warned. Chayabol said Nakhon Si Thammarat, where the storm made landfall, suffered the most damage as 78 per cent of the affected people – nearly 550,000 – were in this province, while two out of three casualties also occurred there.

The storm made landfall on the Pak Phanang district coast on Friday afternoon, lashing the coastal areas with gales blowing at up to 120 kilometres per hour and waves up to 4 metres high storm surge. The intense continuous rains throughout Friday night from the storm also triggered flash flooding in all 23 districts of Nakhon Si Thammarat.

“The Disaster Prevention and Mitigation Department is coordinating with the military and other related agencies to provide assistance to disaster-affected people as well as drying the flooded areas in order to restore the normal lives of the people in the storm affected areas as soon as possible,” Chayabol said.