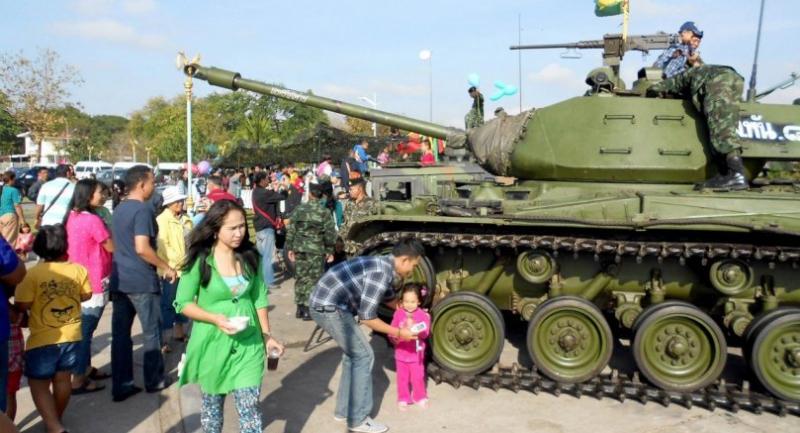 From Thursday to Saturday, military tanks and heavy weapons will be seen on the streets of Bangkok as preparations are made to mark Children’s Day, Colonel Sirichan Nga-thong, deputy spokesperson for the National Council for Peace and Order, said on Wednesday.

Armoured vehicles, tanks and artillery will be moved from military bases in nearby provinces to the two military sites in Bangkok where Children’s Day events will be held on Saturday.

Military aircraft will make an appearance on Thursday morning, as they are moved from Lop Buri to the 2nd Cavalry Division (King’s Guard) at Sanam Pao area in Bangkok's Phya Thai district, Sirichan said.

Military tanks and armoured vehicles will then follow on Friday morning, heading from military bases in Bangkok, Prachin Buri and Sara Buri to the 2nd Cavalry Division and the Royal Thai Armed Forces headquarters on Chaeng Wattana Road, Sirichan said. The route used for moving the military vehicles and weapons on both days will cover Vibhavadi-Rangsit, Phaholyothin, Taharn, Pradipat and Tiwanond roads, she said.

Once the Children’s Day events are completed on Saturday after 5pm, the artillery and vehicles will return to respective military bases using the same route, Sirichan said.

Apologising for the inconvenience, she said other provinces may see similar military vehicles and artillery being transported.