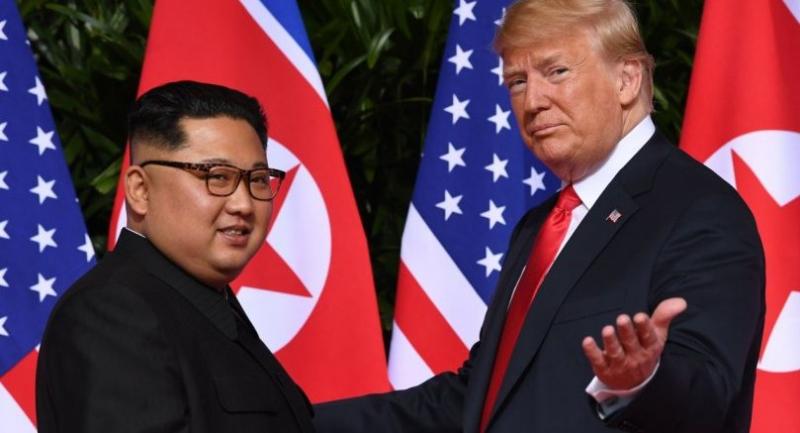 In this file photo taken on June 12, 2018 US President Donald Trump (R) gestures as he meets with North Korea's leader Kim Jong Un (L) at the start of their historic US-North Korea summit, at the Capella Hotel on Sentosa island in Singapore. --AFP

Thailand, as Asean chair, is ready to facilitate the second summit between North Korean leader Kim Jong-un and US President Donald Trump, an official at the Thai Foreign Ministry said on Friday.

Bangkok is among Asian cities reportedly being considered as possible venues, along with Vietnam and Singapore, for the summit between the two leaders.

It would be a joint decision by the US and North Korea about their meeting venue, and the status of Asean chair will not be a factor, said the Foreign Ministry’s Asean Affairs Department director-general, Suriya Chinadawongse.

Asean, however, has engaged with North Korea at the Asean Regional Forum (ARF), a security consultation forum, and with the US in many forums, including the ARF and the East Asia Summit.

“In our capacity as Asean chair, we could facilitate the use of such forums for the benefit of peace in the Korea Peninsula,” he said. “It is not our style of diplomacy to offer Bangkok as the venue; it depends on their decision.”

CNN had reported early this week that Bangkok, Hanoi and Hawaii have been visited by White House scouting teams in search of a location for the potential summit between Kim and Trump.

The Korea Herald reported on Thursday that Vietnam and Singapore were likely to be shortlisted to host the second summit between the two leaders.

Singapore and Vietnam are within flying distance of the North Korean leader’s plane, the Chammae-1, which is capable of flying a distance of 7,000 kilometres. This matches Trump’s comment that the summit will be held “within plane distance”, in early December, it reported.

According to CNN, some experts worry that hosting the summit in the Vietnamese capital Hanoi would send the wrong message because it would invite a comparison between North Korea and Vietnam. Kim does not want to emulate another communist country’s efforts to modernise its economy, experts say. Kim is wary of inviting foreign investment, which he believes could disrupt his grip on power.

It is believed that Bangkok would remain in the running to be the venue, as Thailand has the advantage of diplomatic ties with North Korea. And like in Singapore – where Trump and Kim met in June last year – Pyongyang would be able to send its teams that could be based at its embassy in the city ahead of time for planning. That will not be the case with Hawaii.