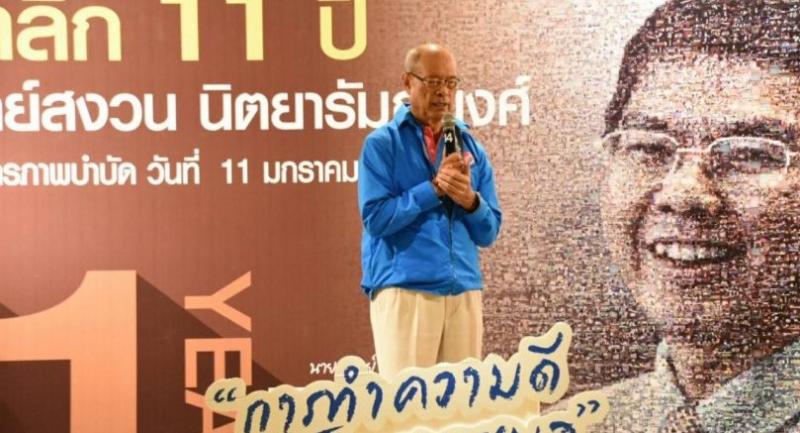 A FORMER public health minister has recommended the sufficiency economy philosophy and friend therapy as the means to sustain the country’s health security.

Speaking in front of more than 500 healthcare representatives and interested people at a forum, he noted the country’s healthcare systems needed to address the growing elderly population and dubious policies implemented by persons with a conflict of interest.

The Friend Therapy Foundation (the Dr Sa-nguan Nittayaram-phong Fund) organised the forum. Sa-nguan, who passed away in 2008, was the first secretary-general of the National Health Security Office (NHSO). The country’s universal healthcare scheme, which is managed by the NHSO, has won widespread praise and even international recognition.

At present, the scheme offers almost all types of medical service to about 48 million Thais for free, and assures people that illness will not plunge them into medical bankruptcy. “It’s a proof that the government can spend taxpayers’ money on creating people’s health security,” Mongkol said.

The universal healthcare scheme, however, faces a budget challenge as its expenses have been growing every year.

The rising cost is the result of several factors, including the growing number of elderly people in Thailand and the increasing use of advanced medical technology that is useful – and expensive. Mongkol also suspects that some powerful interest groups could be playing a role by influencing policies that threaten health security of people.

The country should be able to deal with coming challenges if it embraced the Sufficiency Economy Philosophy in running the universal healthcare scheme.

“Use appropriate technology in boosting primary healthcare,” he |recommended.

He said that the country should also promote the “friend therapy concept” in which friends help friends and patients help other patients. “People with health problems want understanding and advice from people with the same experiences,” Mongkol said.

“As they share their experiences and information, they can help each other”.