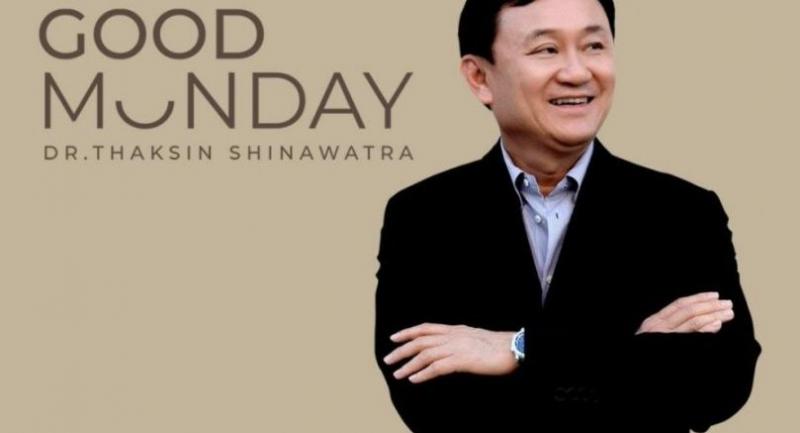 POLITICAL SCIENTISTS yesterday said the latest move by former prime minister Thaksin Shinawatra to show his vision through a weekly podcast “Good Monday”, could invite comparisons between the Shinawatra and the pro-junta camps ahead of the upcoming election.

The first podcast in the series was launched yesterday and it could also be viewed on Thaksin’s official website thaksinofficial.com.

Thaksin wrote on his Facebook that through the podcast “Good Monday”, he would share with Thai people every Monday morning how to handle changes in the world.

The content will be distilled from his experience of living abroad for 12 years, travelling to many countries both advanced and underdeveloped, as well as meeting numerous political and business leaders, according to the Facebook post.

“Every Monday, when we wake up, we want to know if our way of making a living is still relevant and if we need to change because the world is changing so fast now,” Thaksin wrote. “If the sharing of my experiences can be an inspiration to change how you make a living or raise your kids, I will be very happy.”

In the first episode yesterday, the former PM talked about economic trends this year and the next year that would affect smaller businesses as well as Thai peoples’ quality of life.

Following the launch of the podcast, political scientist Sirote Klampaiboon pointed out that Thaksin remained one of the few living Thai ex-PMs who remained popular among a section of Thai people.

“Though some might see him as politically calculating, Thaksin has earned acceptance from the people since he led the now defunct Thai Rak Thai Party in 2001 as a visionary leader,” Sirote wrote on Facebook. “To demonstrate this again in 2019, Thaksin is showing the people the difference between a visionary leader and a short-tempered, narcissistic leader.”

Another political scientist from Rangsit University, Wanwichit Boonprong, also said that Thaksin was showing his superiority via the podcast, and it would lead to people make comparisons between him and the ruling junta and the pro-junta Palang Pracharat Party.

This move will force the pro-junta camp to come out and criticise the former PM, he said. But at the same time, all eyes would also be on Thaksin and his move via his website and the podcast, he added.

Aside from direct competition with the ruling junta, Wanwichit also viewed the launching of the podcast now, with the elections fast approaching, as proof that Thaksin was ready to fight.

If some parties or political groups get involved, Wanwichit said they might risk getting dissolved because the charter prohibits outside influence.

However, another way to look at it is that Thaksin may want the dissolution to happen to add fuel to the fire. He may expect his supporters to take to the streets and fight the ruling junta, Wanwichit observed.