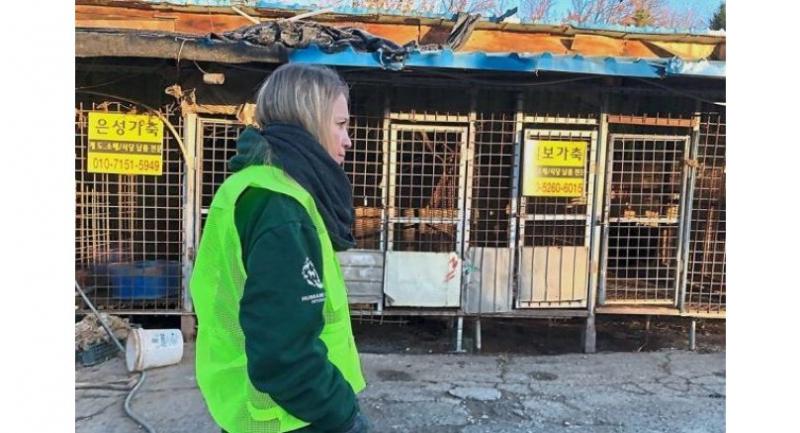 Stark picture: ﻿A member of the US-based Humane Society looking at empty cages at the Taepyeong-dong dog slaughterhouse﻿ in Seongnam city, which was closed down, in this file picture.

Seoul: The leader of one of South Korea’s largest animal rights groups has been accused of secretly exterminating hundreds of rescued dogs – despite a declared no-kill policy – to ensure a continued stream of donations.

South Korean attitudes on canines are divided – about one million dogs are eaten every year in the country, often as a summertime delicacy.

But the tradition is declining as the nation increasingly embraces the idea of dogs as pets, with eating them now something of a taboo among young South Koreans.

For years, Coexistence of Animal Rights on Earth (Care) has spearheaded campaigns to rescue canines from dogmeat farms across the country, accumulating some 23,000 members and around two billion won (RM7.3mil) in annual donations.

South Korean President Moon Jae-in – who is a known animal lover with several dogs – adopted a small black and white mongrel from Care when he came to office in 2017.

Staff members at Care told the Hankyoreh newspaper that the organisation’s head, Park So-yeon, had more than 230 rescued dogs destroyed because of a shortage of space at the shelter.

The number was equivalent to around a quarter of the animals the group rescued in the period, according to the newspaper.

Only 10% of the dogs were suffering from incurable illnesses and most were killed because of their large size, a Care employee was quoted as saying.

The animals were then listed as having been adopted.

Care has often appealed for donations to carry out more rescues, and needs to continue operations to justify the funding requests.

The group has long asserted in those appeals that it does not kill dogs even if they are not adopted.

But Park said in statement that a “small number” of exterminations had been “inevitable” since 2015 due to a “surge in requests for rescue missions”.

She added that only severely aggressive dogs or those with incurable illnesses were destroyed, and only after extensive efforts to treat them first.

Care staff members mounted a protest in the organisation’s offices at the weekend to demand Park’s resignation.