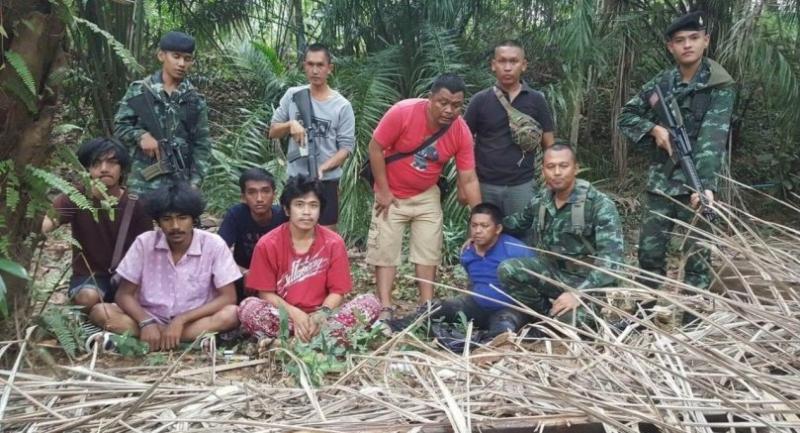 RELATIVES AND FRIENDS yesterday called for the death penalty to be handed down to murder suspect Teerapol Pin-amorn following his arrest in the border province of Ranong for killing five members of his family.

Teerapol is accused of shooting dead his wife, her parents and two aunts, as well as wounding two other relatives at their home in Uttaradit’s Pichai district, on Sunday .

The victims’ relatives and villagers organised funeral rites at Wat Ban Dong and Wat Ban Koh Waree for the deceased, whose bodies were due to be returned from the morgue late yesterday. Those in mourning, as well as residents in neighbouring Tambon Phaya Man, said they were relieved Teerapol, 37, had been caught, as they had lived in fear for two days following the dreadful bloodbath.

They also called for the death sentence to be given to Teerapol, should he be convicted, because they considered him to be a dangerous and cold-blooded man who killed five people in one rampage.

Such sentiment was also evident in Uttaradit-based social media pages, where people went further and said police should have just shot him dead during his arrest.

At Wat Ban Koh Waree, it was planned to later stage the cremation of Teerapol’s wife and her parents together on the same wooden pyre as per old tradition, said villagers.

Uttaradit Justice Office official Piyanuch Mingmuang, meanwhile, said her team had prepared documents to provide compensation to heirs of the five deceased and the two wounded relatives currently being treated at Uttaradit Hospital. This would be in line with the Damages for the Injured Person and Compensation and Expense for the Accused in Criminal Case Act 2001.

Citing her team’s recent visit to explain their entitlement to financial assistance if they submitted requests within a year as per the Act, Piyanuch said the affected family members were still traumatised by what had happened.

National police deputy commissioner Pol General Chalermkiat Srivorakan said he would travel with Uttaradit police to fetch Teerapol from Ranong for further interrogation and a crime re-enactment today. Chalermkiat said police and army officers had seized a pistol from Teerapol during his arrest in the Thai-Myanmar border area, and police would check if that was the murder weapon.

Police are giving more weight to jealousy and disputes inside the marriage as a murder motive. The couple, who had been together for one year, had reportedly often fought due to Teerapol’s alleged abuse of alcohol and drugs, Chalermkiat said. He said he couldn’t confirm if Teerapol’s wife was pregnant until he had seen the result of the post-mortem.

Two drivers who were spotted on CCTV footage helping Teerapol to get a ride to Bangkok during his earlier run from police, told Uttaradit police via phone that they didn’t know the suspect personally.

The unnamed girlfriend of one of the drivers, nicknamed Kung, said he was returning in his Toyota pick-up truck from a cargo delivery in Chiang Rai to Bangkok when he spotted Teerapol hailing a ride at a crossroads in Phitsanulok’s Muang district.

Teerapol told Kung he had had a fight with his girlfriend and needed a ride to visit his severely-ill mother in Bangkok, so he felt sorry for him and happily accepted Teerapol’s offer to pay him Bt1,000 to take him.

A friend of Kung’s drove the other car, a Honda sedan, to accompany him.

Police intend to interview the two drivers and eyewitnesses in detail in order to determine if they had deliberately abetted the fugitive or had innocently done so without knowing about the crime.