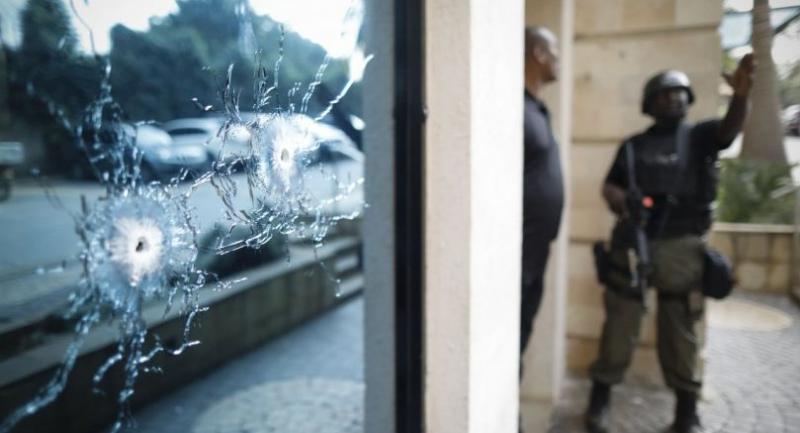 Security officers stand next to a marred window during an ongoing gunfire and explosions in Nairobi, Kenya, 15 January.//EPA-EFE

Bangkok-based Dusit International yesterday said it was extremely saddened by the violence that took place at the Dusit hotel complex in Nairobi on January 15 in which at least 15 were killed.

The DusitD2 Nairobi hotel, which is managed by Dusit International, has closed its operation until further notice, according to a statement posted on the group’s website.

At least one suicide bomber blew himself up at the hotel in Nairobi on January 15, while gunmen sprayed fire before engaging security forces and holding themselves up on the premises as civilians fled or barricaded themselves in their offices awaiting rescue, AFP reported. The attack ended this morning.

“We have 15 people dead as of now and that includes foreigners,” said a police source. After 12 hours trapped inside the complex, a group of dozens of people was freed.

According to the group’s statement, the management and staff were devastated by the incident.

“We are extremely saddened by this act of violence and would like to extend our deepest sympathies to all those affected,” read the statement. “Our highest concern is the safety and well-being of our guests and employees, and we are providing every support we can. The Royal Thai Embassy, Nairobi, Kenya has confirmed that all Thai staff are safe.”

The local authorities have taken control of the complex and are dealing with the situation, the statement said. “We are in constant contact with the authorities and would like to thank them for their swift response.”

The guests and upcoming reservations were being relocated to other hotels in the city, and the hotel was closed until further notice, it read.