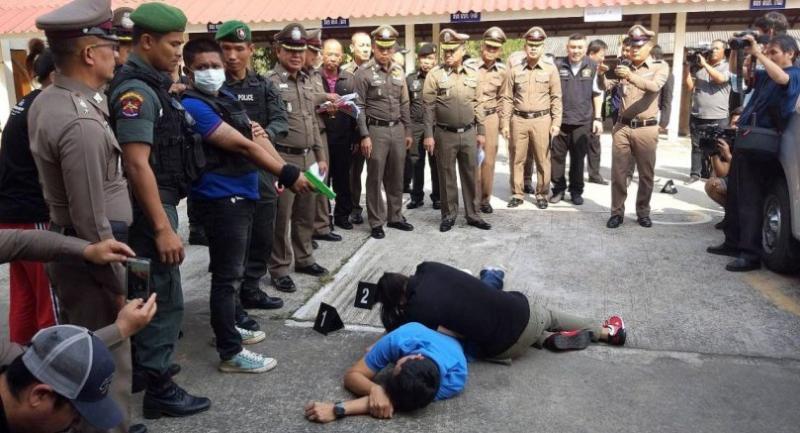 Murder suspect Teerapol Pin-amorn is made to re-enact the alleged murders in the Uttaradit Police Office’s backyard on Wednesday. Police chose not to use the actual crime scenes out of fear for the suspect’s safety.

By BOONPIM BAIYA
THE NATION

OTHER THAN facing serious charges in the highly-publicised murder spree in which he allegedly killed five members of his family on Sunday, 37-year-old Ranong resident Teerapol Pin-amorn will also be hit by fraud charges. The suspect is wanted for allegedly murdering his wife and in-laws in Uttardit’s Pichai district, as well as for allegedly duping a Catholic priest in Chon Buri of close to Bt30 million.

The fraud charge stems from a January 4 complaint filed at Chon Buri’s Sri Racha Police Station by Joseph Chaiyo, 66, who was allegedly duped by Teerapol in 2014, Sri Racha precinct superintendent Pol Colonel Reungsak Buadaeng said. The priest claimed that Teerapol had presented a 10-rai (1.6-hectare) Phuket land title deed, which he claimed to have sold for Bt35 million to another person.

He then told the priest that he could not take that money out of his bank account as it was frozen because his relative had been charged for drug trafficking. Hence, the priest said, Teerapol wanted to borrow Bt29.8 million for expenses as he worked to unfreeze his account. The priest believed Teerapol and wired the Bt29.8 million, which had been earned legally. Meanwhile, Teerapol was charged with pre-meditated murder, attempted murder, illegal possession of firearms, and carrying and shooting a gun in public places after he reportedly confessed to killing his wife, her parents and her two aunts on Sunday out of anger.

Teerapol faces pre-meditated murder charges because he reportedly shot dead his wife Kanyarat Kingkaew, and his father-in-law Wirat Kingkaew, 46, before driving 5 kilometres to kill his mother-in-law Nampheung Intha-rasit, 48, her twin sister Nampha and another sister Kanokwan, 53. He also shot and wounded two other relatives at Wirat’s house.

Teerapol claimed his in-laws had been keeping him away from his wife, and that the father-in-law had allegedly refused to return assets, including cars and other properties and even dared him to sue to get them back.

The suspect claimed the murder weapon was bought from another man called Tam, after investigation showed that Teerapol did not have a licence to own, carry or use firearms.

No way to flee

Teerapol, who was arrested in Ranong’s Kra Buri district on Tuesday, was taken in for interrogation in the presence of national police deputy commissioner Pol General Chalermkiat Srivorakan on Wednesday. A press conference was held later at the Uttaradit Police Office.

Meanwhile, Ekkarat Khamheang, who was married to the younger sister of Teerapol’s wife and was shot in the left arm, called for capital punishment to be handed down to the suspect because he said, Teerapol intended to kill everyone in the family.

Tearfully paying respects to his deceased in-laws at Wat Ban Koh Waree on Tuesday evening, Ekkarat recalled his and his wife’s narrow escape. Apparently, Teerapol had driven over to the house to reunite with his wife, but was met with heated words from both Kanyarat and her father.

After an exchange of verbal abuse, Teerapol pulled out a gun and shot dead Wirat and Kanyarat, Ekkarat said. Ekkarat said when he and his wife came to help, he was shot in the left arm before both he and his wife ran towards an adjacent cornfield for safety. Another male relative was also shot at and fled.

Ekkarat said Kanyarat and Teerapol often had quarrels over his alleged jealousy and drug abuse, which had supposedly led him to make death threats against the family several times before.

He alleged that Teerapol had also physically assaulted his wife previously, and she had filed police complaints on two occasions. “The incident probably stemmed from Teerapol’s intoxication, but nobody thought his threats would come true,” Ekkarat said, adding that Teerapol claimed to have made a lot of money from a lottery business in Phuket and from stock trading.