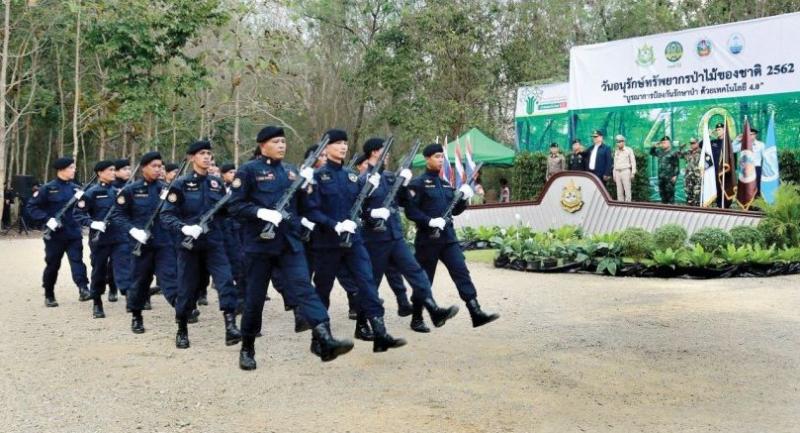 CHEEWAPAP Cheewatham recently stepped down as leader of Thailand’s most powerful forest suppression taskforce, Phaya Prai, after nearly five years at the helm.

The Forest Protecting Operation Centre (FPOC) that oversees his taskforce is undergoing a change, embracing a somewhat softer approach towards forest dwellers as the new national land policy allows those eligible to continue living in the forests.

In his new role as deputy director of the FPOC and director of the Royal Forest Department (RFD)’s Forest Protection and Fire Control Bureau, Cheewapap will now have more authority when it comes to overseeing the centre’s directives.

He sees the change as a boon for the forest-protection taskforce, with the new policy helping them differentiate between encroachers and those who have the right to live on forested land.

“With this new policy, we will be able to focus on two aspects of the job – taking care of those who have the right to continue living in the forest, and [apprehending] those who are there illegally. But the foremost thing is differentiating them from one another – a task that was never made clear before,” Cheewapap said.

Forest dwellers, whose claim on the land overlaps with that of the state, have long been a hot issue in Thailand, with previous government trying to tackle it on several occasions.

While the issue has been subject to review, it has been further complicated by the fact that several of these controversial land plots have reportedly been sold to rich people, who bought them for recreational or agricultural use. This has fuelled massive forest clearance, adding new headaches for forest officials.

According to the RFD, 6.4 million rai (1 million hectares) of forested land under watershed classes 1 to 5 was occupied before the 1998 Cabinet resolution, in which forest officials were instructed to examine land rights nationwide.

Another 6.5 million rai of newly cleared and occupied land in forest reserves has since been added.

Separately, 5.9 million rai of protected forests is occupied, according to the Department of National Parks, Wildlife and Plant Conservation (DNP), 3.6 million rai before the 1998 resolution and another 2.3 million rai later.

The forest-protection officials were then given the mission to take back the land that had changed hands or cleared in the years since the resolution.

Working with the Phayak Prai and other forest and coastal suppression bodies, the FPOC has managed to take legal action on 26,800 cases, with 751,409 rai of forest land seized and 5,541 wrongdoers charged. This was achieved over the past five years, since the 2014 post-coup government set up the suppression forces and the centre.

The national land policy committee, chaired by Prime Minister Prayut Chan-o-cha, this year made history by allowing for the first time, those with conflicting claims to continue living in the forests without having their claims examined and verified.

The directive includes conditions related to the different types of forest, along with a strict screening process by multi-stakeholder panels for those subject to approval.

In this way, Cheewapap believes, the land snatchers and encroachers will finally be pushed out and subject to law.

“In the past we had to work on screening them out, starting with intelligence agents – a task that has never been easy as they have sophisticated means to elude detection,” he said.

“But from now on, a screening process will be conducted by the panels and those having no qualifications will be pushed out. That is where we will follow up and take legal action.”

Natural Resources and Environment Minister General Surasak Karnjanarat has instructed the centre to better embrace the new policy and adjust the attitudes of its officials.

The two sides – forest crime suppression and management – need to go together, he said at this year’s National Forest Conservation Day event held in Lampang province.

The centre has been upgraded with six regional units set up, including one in Lampang, to help pay more attention to local issues, such as rampant illegal logging.

Also, a new forest patrol flight unit is to be set up under the centre to help monitor forest crimes in real-time, with the use of technology and applications, including the Forest4Thai app.

General Surasak said the deputy chiefs of concerned departments will be appointed as deputy heads of the centre to work alongside its director, RFD chief Athapol Charoenshunsa.

Forest suppression, Surasak said, is still the most critical task for forest officials and this government vows to pursue it.